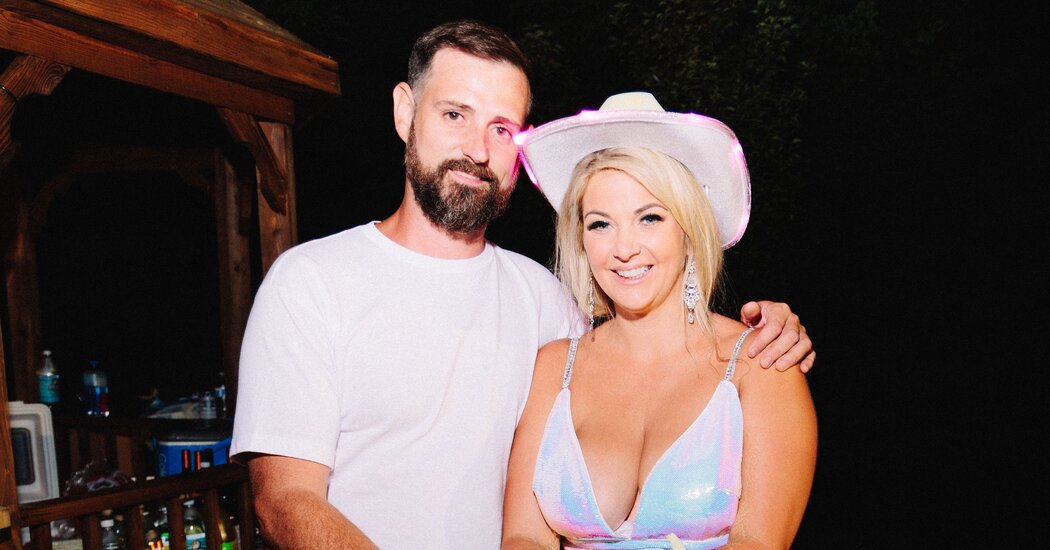 For Two College Students, Finally a Place (and a Person) to Call Home

On the day that Cait Josephine McDonagh was born, David Thomas Doherty was among the kindergarten classmates of Ms. McDonagh’s oldest brother who signed a card welcoming her into the world.

“I’ve known her forever,” Mr. Doherty said. “But, obviously, she was a lot younger than me, and I never in a million years thought we’d be together.”

Their families lived two blocks apart in the Sunset Park neighborhood of Brooklyn, and their parents were friendly. Given the six-year age gap — he is now 42; she is 36 — they never overlapped at school, but he was close with all three of her brothers, so they saw each other often.

“She was always cool,” he said. “She was never annoying.”

“He was always just around,” Ms. McDonagh said. “At the bodega, getting pizza. He played sports with all my brothers.”

She remembers one moment, when she said she was 8 or 10 years old, that they were in Keansburg, N.J., by the boardwalk, and she remembers thinking to herself, “He is such a cutie, this guy.”

In 2008, after the last of her brothers moved away, Ms. McDonagh returned to Sunset Park after four years at Iona College (now called Iona University) in New Rochelle, N.Y. She and Mr. Doherty began hanging out.

She is now an accountant at Industry City, an industrial complex on the waterfront in Sunset Park. In addition to her undergraduate degree, she also has a master’s degree in public administration from the City University of New York’s John Jay College of Criminal Justice.

“He was left with me,” Ms. McDonagh said, though, she added, she viewed him as a buddy, not a confidant. Mr. Doherty joined Local 608 of the United Brotherhood of Carpenters union, in Manhattan, after graduating from high school, but was permanently disabled by an on-the-job injury in 2004.

“I wasn’t really telling him about my dates,” she said. “He was close, like a brother-but-not-a-brother.”

The connection between the two did not go unnoticed by their families.

“For the longest time, everyone in our family was, ‘When are you two getting married?’” Ms. McDonagh said. “I was like, Eeew! No!”

However, in June 2020, during Covid’s early months, their relationship took an abrupt turn. It occurred after she had been complaining to him about the cost of eating takeout every day at her summer rental with friends in Far Rockaway, Queens. He promptly made a trip to Costco and stocked her rental fridge with enough food for the remainder of the summer before joining her, after the sun had already set, at the beach.

“That was really sweet,” she said. “A few drinks later, things shifted.”

The next day, the two agreed to pretend that their hookup hadn’t happened. Then a day or two later, he had a barbecue at his place, and it happened again.

“We were basically dating without telling my family for about a month,” she said. “We didn’t tell anyone.”

“We were serious right away,” Mr. Doherty said.

When they did eventually confess that they were seeing each other, their families were thrilled.

“My brother Brendan is closest to me in age, and he was like, ‘ I couldn’t be happier for you!’” she said.

The two were married Sept. 10, at St. John the Baptist Ukrainian Catholic Church in Jewett Center, N.Y., with the Rev. Kyle Eads, a Roman Catholic priest, performing the ceremony. As many as 350 of the guests who R.S.V.P.’d yes — far more, in any event, than the church’s capacity — attended.

After Mr. Doherty proposed on April 30, Ms. McDonagh dove immediately into planning a three-day event centered around their weekend house in Ashland, N.Y., in the Catskills. It included a bonfire with live music on Friday, the wedding and reception — with more live music — on Saturday (events commenced at 2 p.m. and wound down around 5 a.m. the next day). In a nod to the groom’s Polish American heritage, on Sunday, the couple had a poprawiny, a traditional second-day Polish American party. For the event, she ordered 1,000 pierogis, plus kielbasy and Irish sausages. She coordinated all the festivities herself, leaning heavily on her 12 bridesmaids for support.

When she booked the date, someone at the church, she said, told her she’d never be able to get it all together in such a small handful of months.

But the effort was worth it.

Bolly Buzz: Neetu Kapoor celebrates her birthday with family in London; Rashmika Mandanna to collaborate with Tiger Shroff for Shashank Khaitan’s next – Times of India ►

Sixth edition of ‘Dubai Fitness Challenge’ will begin from October 29

At the Barbershop, a Meet-Cute Mid Cut

For Two College Students, Finally a Place (and a Person) to Call Home