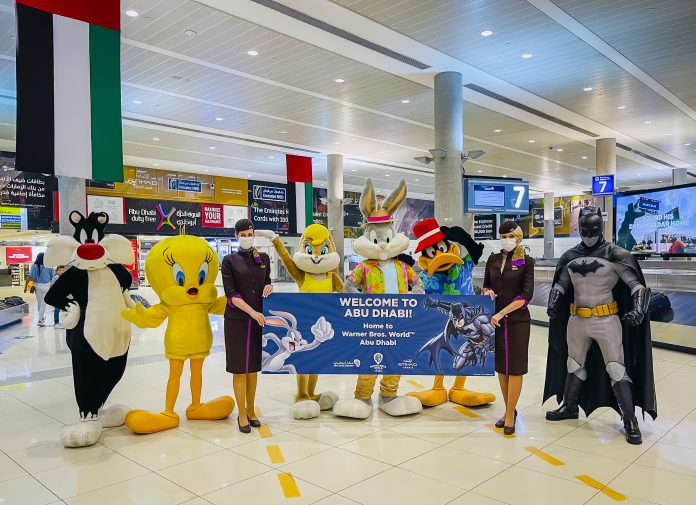 Warner Bros. World™ Abu Dhabi in collaboration with Etihad Airways and Abu Dhabi Airports, surprised passengers arriving at Abu Dhabi International Airport with a special welcome gift and an unexpected appearance from some of their all-time favorite Warner Bros. characters.

While arriving passengers were waiting to pick up their luggage, they started noticing a basket of carrots, Batman’s suitcase, and quirky resort baggage revolving on the conveyer belt. As they turned their heads looking for answers, Etihad’s Cabin Crew appeared alongside none other than Batman, Bugs Bunny, Lola Bunny, Daffy Duck, Sylvester and Tweety, entertaining the crowd at the airport with nothing but happy faces as they see them holding a banner that reads: “Welcome to Abu Dhabi. Home to Warner Bros. World™ Abu Dhabi”.

Families and their kids rushed to take pictures with Batman, Bugs and the rest of the Tunes who were in their resort outfits on their way to pick up their personal belongings before they head back home to Warner Bros. World Abu Dhabi.

With tons of fun moments and endless whimsical action in store, passengers were excited to find a tag on their luggage, with complimentary tickets to visit the incredibly immersive indoor theme park on Yas Island, Warner Bros. World™ Abu Dhabi!