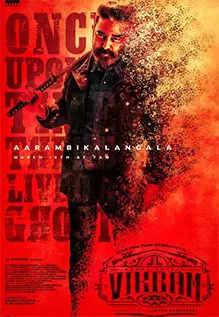 Kartik Aaryan shares his thoughts on marriage, reveals ‘I am a romantic at heart’ – Times of India

Vikram Movie Synopsis: Following a series of murders of police officials, a black ops cop goes after a mysterious gang of masked men, which has declared war on the system, which is protecting a fearsome drug lord.

Vikram Movie Review: Lokesh Kanagaraj brings together the espionage-filled world of Kamal Haasan’s 1986 film Vikram and his own Kaithi’s action-filled world of drug lordala and cops in Vikram, a predictably plotted action film that is more interested in expanding its universe without really immersing us into it. It holds the mysteries of a spy film and provides the thrills of an action film to some extent, but it doesn’t feel wholly satisfactory and fails to leave us with the adrenaline rush that a film with such ambitions promises.

The film does gets starts off intriguingly, when Karnan (Kamal Haasan), the father of a martyred cop Prapanchan (Kalidas Jayaram) is killed. We learn that there has been a series of such killings with a group of masked men taking responsibility for it and calling it their war against the system. Police chief Jose (Chemban Vinod Jose) brings in a black ops team headed by Amar (Fahadh Faasil), who starts digging into Karnan’s life. The chief suspect is Sandhanam (Vijay Sethupathi), a fearsome drug lord with a large family, who is searching for a shipment of raw material that could make him a kingpin. Meanwhile, Amar is puzzled by the many versions of Karnan. Was he an alcoholic father grieving over the loss of his son, or a womaniser or much more? More importantly, is he dead or alive?

Vikram works best in its first half, when we see Amar and his team trying to make sense of the murders and track down the killers. Even though these portions have very little of Kamal Haasan, we keep sensing his presence, both as the character and as the actor. There are nods to Kamal’s ouvre, from Nayakan to Anbe Sivam, and spotting them offers some minor thrills, especially if you are a Kamal fan. The actor, who is in action star mode here, also gets a whistle-worthy moment, which leads to the interval. And Vijay Sethupathi seems to be taking off from where he left in Master, playing a ruthless villain. In fact, the juxtaposition of the events in this portion recalls a similar setup in Master.

But once the mystery around Karnan is cleared (actually, it is one that’s easy to guess for us, the audience), the narrative becomes rather straight-faced. A small bunch of cops should hold out against an army of gangsters. It’s something that is similar to what we got in Kaithi, but here, it is less effective.

To his credit, Lokesh tries to provide an emotional undercurrent, with a sub-plot involving Karnan and Prapanchan’s baby, but it doesn’t affect us hard enough. And the arcs involving Amar and Sandhanam turn too predictable. Fahadh gets more or less written off while Vijay Sethupathi comes across as trying too hard to make his character feel different from what he did in Master. Narain, as Bejoy, the honest cop from Kaithi, is also given the short shrift. Even the much-publicised cameo by Suriya, which acts as a set-up for the next installment in what’s now being called the Lokesh Kanagaraj Universe, is a tad underwhelming.

The action scenes, while solidly choreographed, never leave us with a rush. There are a couple of cool shots, like a zoom out and zoom in which Karnan and Amar switch places, but after after a point, the stunts leave us unmoved. In fact, in a film filled with action heroes, the biggest mass moment comes in a stunt scene involving a female character. Vikram needed a few more such moments to have been truly memorable.

Kartik Aaryan shares his thoughts on marriage, reveals ‘I am a romantic at heart’ – Times of India