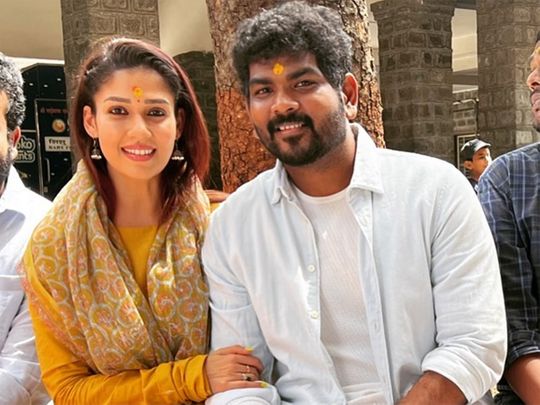 South Indian actress Nayanthara and her filmmaker husband Vignesh Shivan have been enjoying their time with their newborn twins Uyir and Ulagam. For her birthday on November 18, Nayanthara’s first as a mum, the director shared a touching note on Instagram along with romantic pictures.

He wrote: “This is my 9th birthday with you #Nayan…Every birthday wit you has been special, memorable & different ! But this one is the most special of em all , as we have started a life together as husband and wife! As a father & mother of two beautifully blessed children! ’ve always known you and seen you as a powerful person! The strength you have to be confident and dedicated to whatever you do ! I’ve seen a different person all these years ! And always been inspired by your honesty and sincerity shown towards life and everything ! But today ! When I m seeing you as a mother! This is by far the happiest and the most complete formation of you! You are complete now ! You seem the happiest ! You look content ! You look extra beautiful! You don’t wear make up these days cos the babies kiss your face ! And I haven’t seen a more beautiful you in all these years!The everlasting smile and happiness in your face , shall be your default setting henceforth! I pray! Am feeling settled!Life feels beautiful… satisfying and thankful! I wish to have all our birthdays as happy as this ! with our little babies .. all of us growing together! All of us learning to fight it out there , while also enjoying it fighting it out there 🙂 making a wonderful life for us with God’s blessings and the universe’s witness !!! Love to you now & forever my dear Pondaaaati , thangameyyyyy and always my Uyir & ulagam.”

Nayanthara and Shivan met in 2015 on the set of the Tamil movie ‘Naanum Rowdy Dhaan’, where he was the director and she was the lead actress. After dating for years the couple got married in Chennai on June 9 this year at an intimate ceremony that was attended by close family and friends and a few celebrity guests such as Shah Rukh Khan, AR Rahman, Suriya and Rajinikanth.

Recently the couple battled questions about surrogacy surrounding the birth of their twin boys.

Writer Raj Saluja on Aditya Roy Kapur’s Om: An action film with an emotional story is always able to hold its audience -Exclusive! – Times of India

Nayanthara will be next seen in director Atlee’s next action thriller film ‘Jawaan’ with Shah Rukh Khan, which is all set to hit the theatres on June 2, 2023.

Is it safe to eat Bananas in monsoon? | The Times of India

Drake, 21 Savage agree not to use ‘Vogue’ trademarks to promote No 1 album