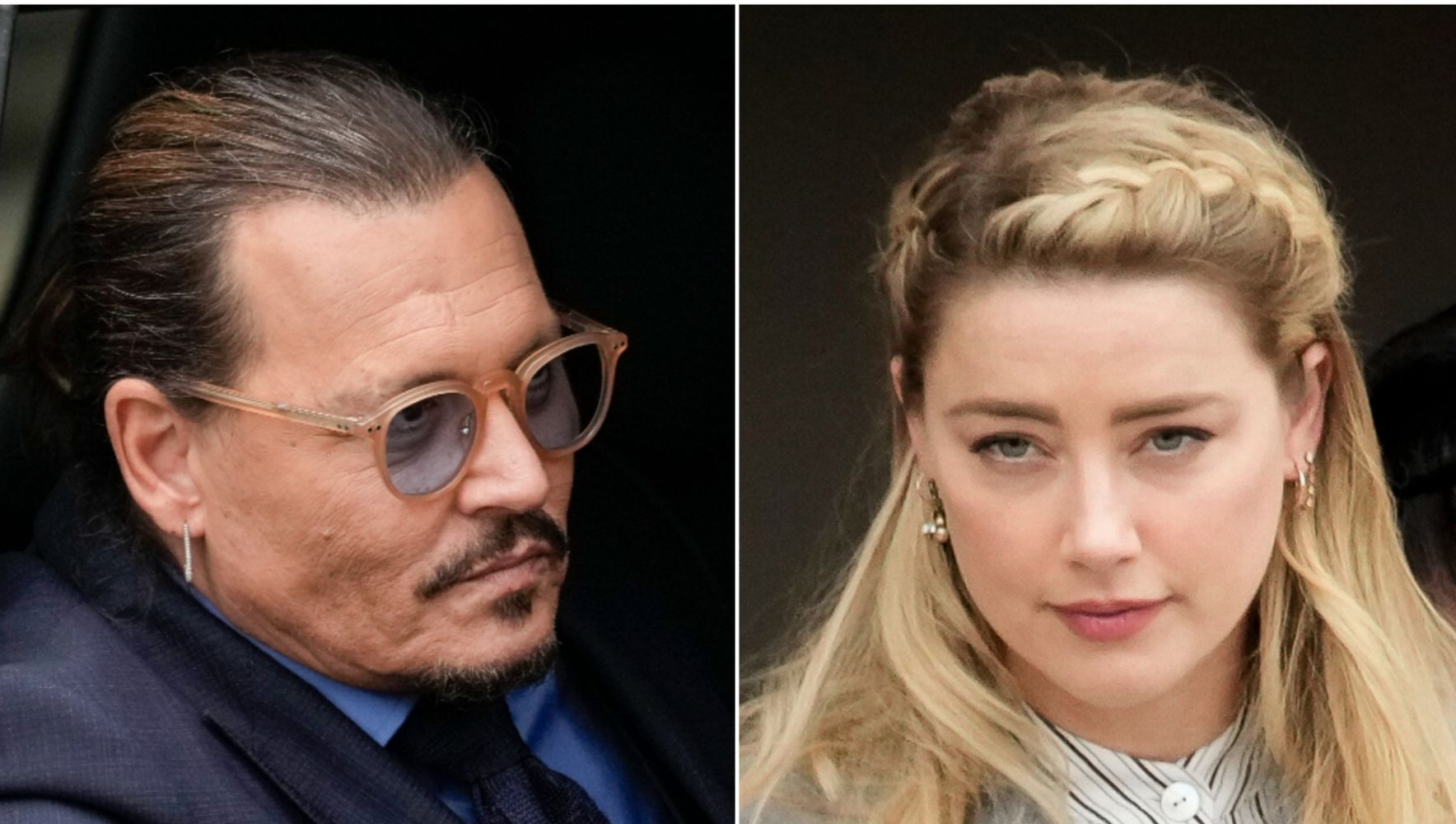 LeVar Burton Says He Was ‘Wrecked’ About ‘Jeopardy!’ Controversy

A Virginia jury decided primarily in favor of actor Johnny Depp on Wednesday, finding that a Washington Post editorial written by his ex-wife Amber Heard was defamatory.

Jurors awarded Depp $15 million in total damages, but Judge Penney Azcarate capped the total at around $10 million in accordance with state limits. Moments later, the panel delivered a mixed verdict in Heard’s countersuit, awarding her $2 million in compensatory damages for one of three statements made by an attorney for Depp, which she said were defamatory.

Depp was not present, having flown to London for a surprise performance over the weekend, but Heard could be seen in the courtroom while the verdict was being read, looking down at the table in front of her.

“The disappointment I feel today is beyond words,” she said in a statement. “I’m heartbroken that the mountain of evidence still was not enough to stand up to the disproportionate power, influence, and sway of my ex-husband.”

She called the verdict a “setback” for women, “to a time when a woman who spoke up and spoke out could be publicly shamed and humiliated.”

“It sets back the idea that violence against women is to be taken seriously,” she said.

Heard has publicly alleged since 2016 that Depp physically abused her during the course of their relationship, which began on the set of the 2011 film “The Rum Diary” and culminated in a brief marriage. Depp says he was the one who was abused, and that Heard’s accusation caused him to lose out on lucrative film roles.

“Six years later, the jury gave me my life back,” Depp said in a statement posted to Instagram following the verdict. “I am truly humbled.”

In court filings, Depp had asked for $50 million in damages, while Heard countersued for $100 million.

Jurors sat through six weeks of arguments and testimony preparing them to answer a number of complicated questions about the case, including whether the claims were made with “actual malice,” a high legal standard. Although the jurors’ identities are under seal, CourtTV ― which provided live video of the proceedings ― reported from inside the courtroom that the panel was made up of five men and two women, apparently ranging in age from their 20s to one man who could be older than 60.

A British court faced with similar questions about abuse in the relationship handed down a verdict in favor of Heard in late 2020, ruling that a U.K. tabloid headline calling Depp a “wife beater” was not defamatory owing to the strength and volume of Heard’s evidence that she was abused. The claim was “substantially true,” Judge Andrew Nicol said in his ruling.

The Washington Post editorial published in 2018 lay at the center of the U.S. case, filed in Fairfax, Virginia, state court.

With help from attorneys at the American Civil Liberties Union, Heard wrote the article describing herself as a domestic violence survivor ― although not explicitly, and without mentioning Depp by name. Heard is called a “public figure representing domestic abuse” in the piece.

Her team framed the case as a First Amendment issue. Upon receiving the verdict, Heard said she felt she “lost a right” she thought she had “as an American.”

The civil trial, held in Virginia because The Washington Post is printed there, kicked off in mid-April and featured lengthy testimony from both actors. A procession of experts ― including dueling psychiatric professionals who attempted to diagnose Heard and Depp ― along with family members, former friends, employees, law enforcement officers and top figures in the entertainment industry rounded out the witness list.

A ferocious pro-Depp fandom ensured that social media mentions of the trial skewed heavily in favor of the “Pirates of the Caribbean” star. Anyone who bucked the trend risked verbal attacks and online harassment. Outside the courtroom each day, a crowd of Depp’s supporters ― largely women ― held handmade signs and cheered as his black SUV turned toward the courthouse entrance and blared reggae music when the actor emerged.

Eventually the firehose of online vitriol directed at Heard sparked concern from groups that advocate for domestic violence survivors, which said the spectacle could discourage victims from coming forward.

Depp’s team went to great lengths to paint Heard as an attention-seeker who completely fabricated her story. One of his attorneys, Camille Vasquez, who emerged as a breakout star in the Depp fandom, repeatedly told the court that Heard was a “liar” who wanted the world to “believe her lies.”

Much of the testimony shared at trial concerned opposing perspectives on a series of violent incidents that allegedly took place during the relationship, such as the private plane ride where Depp allegedly slapped and kicked Heard to the floor while in a blackout state after accusing her of having an affair with actor James Franco. Text messages displayed in court indicated that Depp had been taking drugs and alcohol at the time. Later, Depp’s assistant told Heard by text that the actor had to be informed as to what happened on the plane and cried upon hearing it, pledging to correct his behavior. Depp wished to see Heard in person, according to the assistant’s texts, but she was determined to book her own flight away from him.

Other records shown in court supported Heard’s version of events. IO Tillett Wright, a former mutual friend of the couple who in 2016 penned an essay for Refinery29 to explain why he called the police during a fight of theirs ― “because she never would” ― said in testimony played in court that he had seen physical evidence Depp was abusive. Several former friends who were deposed similarly described Depp as a person who could be volatile.

Perhaps the most disturbing episode took place in March 2015 at an Australian mansion Depp had rented while filming the fifth “Pirates” installment. The couple had been married on Depp’s private island just one month before.

Heard testified that, over three days, Depp consumed an unknown quantity of drugs and alcohol and began to rage at her, shoving her up against a wall, tearing her nightgown and, at one point, sexually assaulting her with a liquor bottle. She said she fled to her room and, when she emerged hours later, found the house in a state of complete disarray.

“I was scared,” she testified. “I had just married him.”

Photographs of the house displayed in court show cryptic messages scrawled in what Heard said was blood from one of Depp’s fingers, which had been partially severed. The jury heard two explanations for the injury: Depp said his fingertip was sliced off when Heard threw a glass bottle at him, and Heard said she believed it happened as Depp was wrecking a landline telephone. Walls, mirrors and at least one lampshade were subject to the graffiti, which was also done in what appeared to be paint.

The incident prompted Disney to pause production of the “Pirates” movie while Depp was flown back to Los Angeles for emergency surgery ― an expensive move for the studio.

Tracey Jacobs, an agent who represented Depp for 30 years, testified that the actor became increasingly problematic on set in the last years of their working relationship, showing up hours late without knowing all of his lines. She had to fly to Australia twice to deal with him while making the fifth “Pirates,” she said.

The actor has been open in the past about his drug and alcohol struggles. In his testimony, he described how his life radically changed with the global success of the “Pirates” franchise, making it hard to go out in public with his kids, and that he tended to lean on substances to cope with difficult emotions.

Yet he refused to describe it as a problem.

“I am not some maniac who needs to be high or loaded all the time,” he told the court.

Not only had Depp never hit Heard, he testified, he had never hit any woman in his life. A traumatic childhood with an abusive mother had supposedly steered him away from physical violence.

According to Depp, it was Heard who “bullied” him and subjected him to “demeaning name-calling.” One of the trial’s most-referenced audio clips featured Heard admitting to striking her former husband, telling him, “Babe, you’re not ‘punched.’ I was hitting you.” Heard testified that she had been pushing back on Depp’s alleged tendency to use exaggerated language for dramatic effect.

Depp said that he simply walked away from their arguments.

But his ex-wife described a cycle wherein Depp would become agitated and disappear ― allegedly on a bender ― until he showed up again, more sober and determined not to act badly. Text messages and emails read in court revealed ample references to Depp’s “monster,” a term for the side of him that allegedly came out when he was drunk, high or both. He repeatedly apologized in the messages.

Heard told jurors at several points in her testimony that she stayed with Depp because he could be very charming when he was sober, and she believed he could change. Researchers have found that one common pattern in abusive relationships is a partner’s alternation between violence, apologies and pleasant behavior.

Still, Depp’s attorneys accused Heard of shameless fakery in what amounted to a yearslong plot to ruin Depp’s reputation for her financial gain, suggesting that Heard could have digitally manipulated photographs in which bruises appear on her face. Instead of standing up as a domestic violence victim, Heard had spun “elaborate, exaggerated, fantastical accounts of abuse” and given the “performance of her life” in court, Vasquez said.

An attorney for Heard, Benjamin Rottenborn, used his closing statements to paint Depp’s arguments as eminently harmful: “victim blaming at its most disgusting.”

“They are trying to trick you,” he told the court, “to believe that Amber has to be perfect to win.”

Riya Sen is in love with black!

LeVar Burton Says He Was ‘Wrecked’ About ‘Jeopardy!’ Controversy