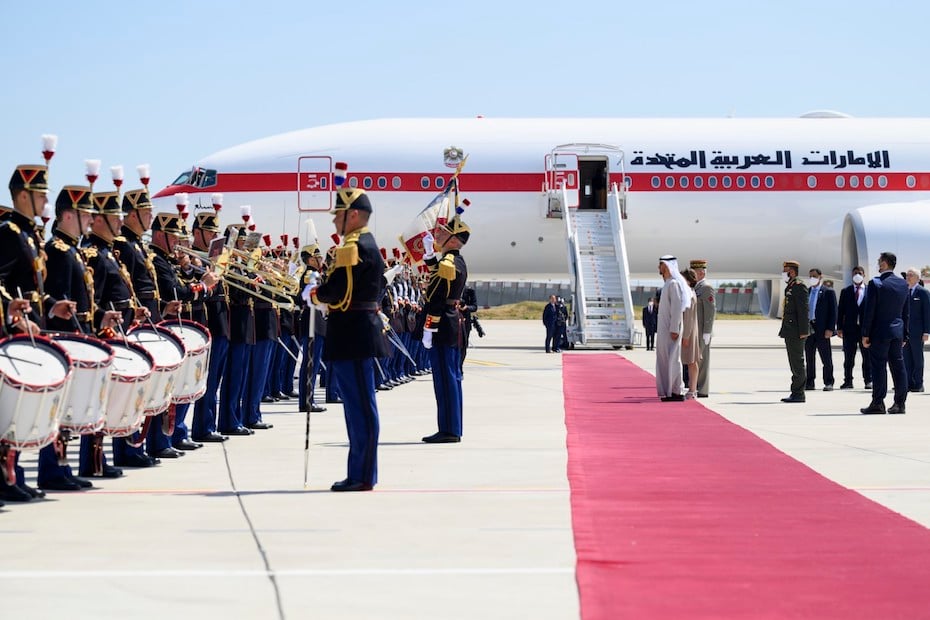 The two sides discussed strategic relations, bilateral cooperation and ways of enhancing them to advance their mutual interests.

They also issued a joint commitment to expand their collaboration across fields, such as peace and stability, food and energy, economy and investment, climate change, healthcare, education, culture and space.

The crisis in Ukraine: Both leaders expressed deep concern regarding the crisis in Ukraine, its impact on civilians, the humanitarian situation, and its effects on commodity markets worldwide. They underscored the urgent need to intensify diplomatic efforts to reach a solution.

Energy and food security: Both leaders established a France-UAE Comprehensive Strategic Energy Partnership, they also welcomed the agreement between TotalEnergies and ADNOC on fuel provision. The UAE announced its support to the Food and Agriculture Resilience Mission initiative, as well as support the Agriculture Market Information System.

Economy, investment, and industry: The two sides praised the recently launched UAE-France Business Council, with a view to further increase bilateral business opportunities for the benefit of both nations. They noted that the council will serve as a tangible outlet to expand the already constructive cooperation that exists between the two countries’ business communities, and agreed to convene the inaugural meeting of this group in the near future.

Climate action: French President congratulated UAE for hosting COP28 in 2023, offering France’s full support. Both sides signed an MoU on Climate Action and confirmed the important role of nuclear energy in their countries’ efforts to decarbonise energy sectors. They also acknowledged MoU on decarbonised hydrogen. Additionally, both parties agreed to work on the development of marine research collaborative programme to promote the sustainable blue economy.

Health sector: One example of successful collaboration is the ‘Cardiovascular Diseases Prevention’ project between the Abu Dhabi Public Health Centre and Assistance Publique-Hôpitaux de Paris. Based on the signing of the MoU in December 2020, the project was implemented by a team of French experts, who helped achieve growth, sustainable development and global competitiveness, as well as exchange of information and know-how.  Both sides also cited the potential of higher education cooperation that focused on developing healthcare expertise.

How wealth advisory must be customised for the new generation

Education, culture, and space: Both leaders recognised the importance of education, culture and science embedded in the fabric of the bilateral relationship, underscoring the contributions of existing key projects, such as the Sorbonne Abu Dhabi, Louvre Abu Dhabi, Ecole 42, EM Normandie Business School, and ESCP Business School. They discussed forthcoming projects, such as gaming school Rubika, and encouraged involving French higher education institutions in UAE, as well as French language teaching in UAE schools. The leaders also signed multiple agreements related to earth observation and lunar exploration to strengthen collaboration in the space sector.

Peace and stability:  As the founding members of the International Security Alliance since 2017, the two nations reaffirmed their commitment to combatting radicalisation, extremism and transnational crime by exchanging experiences and continuing joint operations with fellow member states. Both leaders expressed hope that nuclear negotiations with Iran could lead to a peaceful agreement. The UAE President commended the successful Baghdad Conference on Partnership and Cooperation, and President Macron underscored the benefits of the Abraham Accords.

There is no age-limit to heroes, heroines: Mahira Khan | The Express Tribune