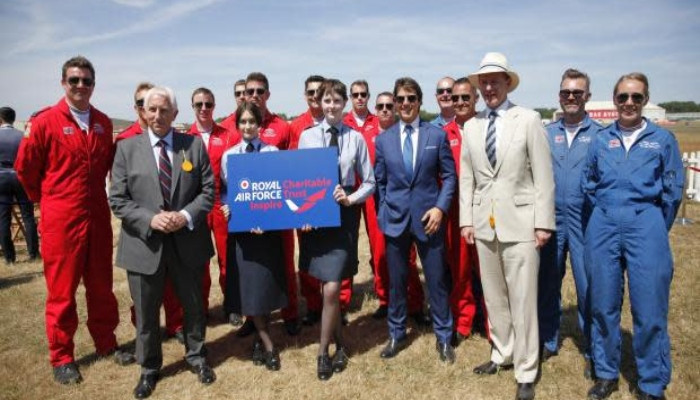 The Top Gun star met the military and stunt pilots at the world’s largest military airshow in the world.

Hosted at RAF Fairford, the event also celebrated the United States Air Force’s 75th Anniversary and featured pilots from around the world in an enchanting show in the sky.

“Feel the need, the need for a pic with the one and only @TomCruise Another fabulous day at @airtattoo for the #rafpolice,” the air show shared the picture online.

Cruise, 60, also posed with the Red Arrows pilots, which is the aerobatics display team of the Royal Air Force.

The Mission: Impossible star wore a sharp navy blue suit and aviator sunglasses as he stood in line with uniformed officers. The group around him posed in front of a helicopter.

“We’ve got a new wingman … Today, Maverick joined the Red Arrows! Epic to meet @TomCruise at the Royal International Air Tattoo and to speak about aviation, teamwork and Top Gun.”

Meghan Markle, Prince Harry Rescued A Beagle And Her Name Will Make You Sing

The long shots are still getting venture funding – TechCrunch