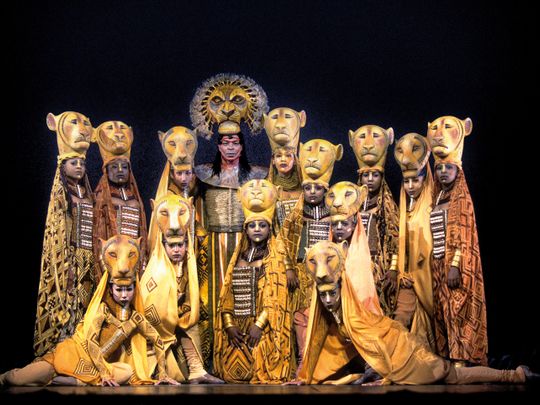 In the summer of 1997, audiences in Minneapolis at the Orpheum Theatre saw something no one had ever seen before: leaping antelopes, fluttering birds and elephants lumbering through the orchestra seats.

“The audience started screaming so early. When the animals came down the aisle everybody shot up,” recalls director-writer Julie Taymor. “I burst into tears. We were just overwhelmed and we knew we had something.”

They did, indeed. That show in a trial run in Minneapolis would soon transfer to Broadway and start a stunning streak that regularly lands it among the weekly top earners and becomes young people’s introduction to theatre. It is “The Lion King,” and it turns 25 years old on Broadway this month.

Fans in the region will also be able to revel in this milestone, as the hit show made its Middle East debut in Abu Dhabi with previews on November 16 and 17, followed by the opening night on November 18 at Etihad Arena, Yas Island. The show runs until December 10.

“The Lion King” has been a model of consistency in its march through records. In April 2012, it swiped the title of Broadway’s all-time highest-grossing show from “The Phantom of the Opera,” despite “Phantom” having almost a full 10 years’ head start. With plans for “Phantom,” to close next year, “The Lion King” jostles with “Chicago” for its crown of longest-running show on Broadway.

So established is “The Lion King” that it’s easy to forget its revolutionary origins. Audiences were seeing Asian-inspired puppets and masks telling an African tale with several African languages, using South African performers and a Black king.

Taymor, who works on theatre, operas and films, recently took time to look back at the blockbuster show she directed, designed costumes for, crafted masks and puppets with Michael Curry, and even added lyrics for the song “Endless Night.”

Her task some 25 years ago was enormous: reimagining Disney’s animated blockbuster with its iconic Elton John songs — including the Academy Award-winning “Can You Feel the Love Tonight” — into a live spectacle set on the African savannah. She filled the stage with warthogs and meerkats, with birds circling high on sticks and antelopes in the mezzanine.

“To work with Julie Taymor is a gift,” says Bonita J Hamilton, who plays Shenzi, the hyena leader. “She is a genius and a visionary. As an actor, to be directed by someone with such vision is almost otherworldly.”

“This is where theatre is better than film. It completely surrounds you, 360 degrees. It’s physical, it’s dimensional and the lighting tells you where to look or the voice pulls you in,” Taymor says.

“Most plays don’t translate to film because they’re not cinematic. And here you have `The Lion King’ movie — the most cinematic. I had to use all the tools in the theatre tool toolbox to make it dimensional and theatrical.”

Taymor made no attempt to cover up the wheels and poles that bring her elaborate puppets to life. The human beings that control the puppets and wear the animal masks are fully seen — it’s up to the audience to supply the imagination.

It is something Taymor has called “the double event,” where the audience not only watches the animals on the stage, they watch humans driving the story, too.

Most of the masks and puppet parts are moulded of carbon graphite, a kind of rigid foam that makes them light and durable. Some have a set of wires to move the mouth and other parts, like the elephant’s ears and trunk.

It was an immersive experience long before that became a theatrical buzzword. “More particularly now, immersive theatre is important because people are just sitting on their couches in their living rooms and bedrooms,” says Taymor.

“The Lion King” made Taymor the first woman to win a Tony Award for best director of a musical. And it has been an incubator for talent: Such Broadway stars as Heather Headley, Renee Elise Goldsberry, Tom Hewitt, Christopher Jackson, Patrick Page, Wallace Smith and Adam Jacobs all have had turns in “The Lion King.”

There have been 28 “The Lion King” productions since the first, it has been performed in nine different languages and seen by a staggering 110 million people. It has played over 100 cities in 21 countries on every continent except Antarctica.

Part of its longevity is due to the movie tie-in, simple-to-understand story, family-friendly themes and the fact that it’s a spectacle not dependent on big-name stars — important for attracting tourists whose command of English might be weak.

“I’m not surprised at the longevity because the movie, when it came out, was so brilliant and then they put the musical on stage, which was a brilliant interpretation of the movie by Julie Taymor. It’s just astonishing what she did,” Oscar-, Grammy- and Tony-winning John said this week.

Before it became a smash, Disney sent its top executives to the culmination of a two-week workshop at a rehearsal space on Broadway. One film boss suggested Taymor lose the puppetry when it came time for the principal characters. She demurred.

Taymor then set up a test on the stage of the Palace Theatre, presenting the musical in three different ways — just facial makeup, half-mask, and her original concept. Then-Disney CEO Michael Eisner embraced her vision: “He said, ‘The bigger the risk, the bigger the payoff,”’ Taymor recalls. “How many people say that?”

‘The Lion King’ in Abu Dhabi

Disney’s ‘The Lion King’ made its historic Middle East debut in the UAE capital on November 16, and will run for four glorious weeks at Etihad Arena, Yas Island.

‘The Lion King’ has permanent residences in New York, London, Madrid and Tokyo, and has toured recently in New Zealand, Australia South Korea and other locations.

“Director Julie Taymor and her extraordinary creative team first brought ‘The Lion King’ to the stage in a stunning production 25 years ago, and this production brings that vision to thrilling life at every performance,” said Thomas Schumacher, President and Producer Disney Theatrical Productions, in an earlier statement. “It’s a joy to bring ‘The Lion King’ to the Middle East for the first time in the show’s history. We cannot wait for you to join us in Abu Dhabi.”

Brought to the UAE by Proactiv in collaboration with the Department of Culture and Tourism — Abu Dhabi (DCT Abu Dhabi) and Miral, the adaptation of Disney’s 1994 animated movie is a coming-of age tale of young lion prince Simba, who goes into exile after his father dies at the hands of his uncle. After Simba grows up, he returns to challenge his Scar and take back his place as king.

Tickets start from Dh200 and are available online.