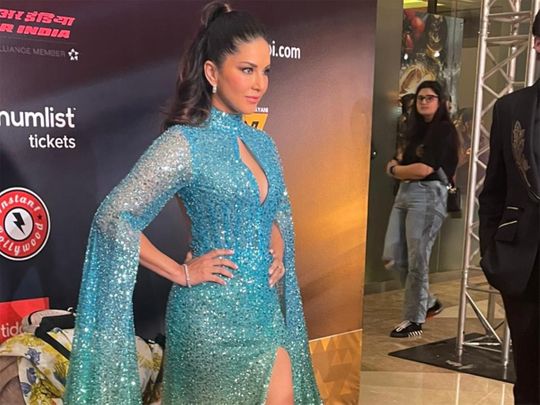 On the red carpet, Hema Malini told Gulf News that receiving the Lifetime Achievement Award at FFME 2022 was a huge honour.

“It is a proof that I did some very good work in films. It’s a proud moment and though I have received Lifetime Achievement many times before, this is a special award,” said Malini to Gulf News.

The night kicked off with a dazzling performance from Sunny Leone who danced to some popular hit numbers in a silver bustier and skirt. She was the first Bollywood actress to hit the stage and bust a few Bollywood moves.

The red-carpet call was equally eventful and saw actors like Tamannah Bhatia, Nargis Fakhri, and Sophie Choudry – who hosted the event on stage together – and Manushi Chillar glide down in dramatic gowns and sharply-tailored tuxedos.

Pakistani stars Sajal Aly, Humayun Saeed, and Fahad Mustafa also rubbed shoulders with Indian talents and proved that art truly has no boundaries. Saeed, who was last seen in The Crown, told Gulf News that it felt incredible to be in Dubai.

“It was a big honour to be a part of The Crown and I am keen to do different kinds of roles. Art has no boundaries,” said Saeed to Gulf News.

Filmfare Middle East Achievers Night 2022 is an annual awards night held to honour the best in Bollywood and beyond.

While the awards give-away was the focal point of the ceremony, the event was also a spectacular showcase for song and dance. Singh, whose credits include the sports biopic ’83 and the stirring rapper tale ‘Gully Boy’, was the portrait of relentless energy and showmanship as he dances to his biggest hits from his films. Every actor, who walked down the red carpet, said they were keen to watch Ranveer Singh’s live act.

“He’s a bundle of energy and it’s always great to see him set the stage on fire,” said Tamannah Bhatia.

How to Make Your Musical Magnum Opus on an iPad

Hollywood actor Matthew Perry on bouncing back from his dark place