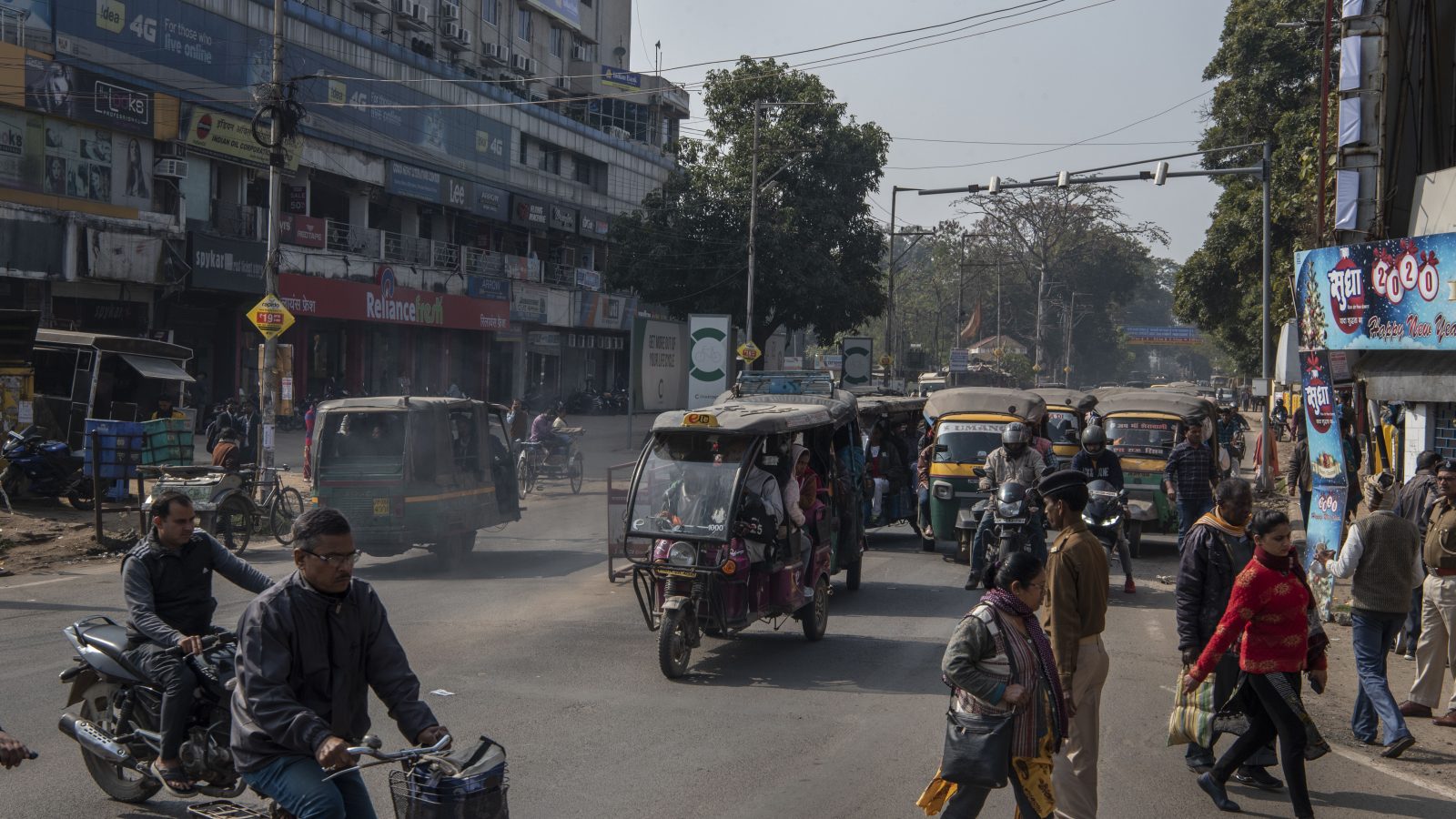 Every day, Abhishek Thadi rides his electric scooter to work at a tech park in Bengaluru, India —  at times, joyriding aimlessly. Thanks to his charger at home, he said, his trips cost a mere 25 rupees (31 U.S. cents) per 75 kilometers of road. He can speed along the airport expressway at 80 kilometers per hour, or take a trip to Mysuru, a neighboring town, charging once along the way.

“The future is here,” Thadi said to Rest of World. “I was expecting that this kind of performance would be way off by many years.”

Thadi, 26, has been watching India’s attempts to electrify scooters for over a decade, waiting for a reliable model to match standard gasoline scooters. He now represents the next generation of electric vehicle (EV) owners in Asia: commuters and delivery drivers choosing electric two- and three-wheelers, encouraged by domestic manufacturing leading the iterative small vehicle transition.

Electric passenger cars made impressive gains between 2019 and 2021, more than doubling the global fleet from 7 million to 16.7 million. They now constitute 9% of the overall car market, according to data from the 2022 Electric Vehicle Outlook report by Bloomberg New Energy Finance (BNEF), released in June. But those numbers pale in comparison to the global fleet of electric two- and three-wheelers, which, as of last year, reached 274.7 million vehicles on the road, comprising 42% of all sales of these smaller vehicles. (Analysts say that these figures represent low estimates, because many smaller vehicles are not officially registered).

Allen Abraham, an analyst at BNEF, calls two- and three-wheel vehicles the low-hanging fruit of the EV transition, particularly in emerging markets, because they are easier to electrify in design. “Adoption of electric two-wheelers is less challenging, not from a cost perspective, but from a technology perspective,” Abraham told Rest of World. “So the impact it can have over the next 10 years or the next decade is higher, because it’s easier.” But this growth is not guaranteed. While sales of EV passenger cars spiked over the past two years, sales of EV two- and three-wheelers appear to have slowed since 2020.

The vast majority of EV two- and three-wheeler sales take place in China, followed by small yet significant markets in India and Vietnam, as documented by the International Energy Agency. Historically, in these countries, most EV riders were not luxury brand owners; they were students, seniors, and working adults on the job, observed regional experts from the International Council on Clean Transportation (ICCT). In Vietnam, EV customers are concentrated in major cities, where two-wheelers emit the majority of particulate air pollution. In India, many serve as an essential leg within e-commerce, delivering produce and packages on three-wheeled carts.

From a cost perspective, a number of electric models in China, India, and Vietnam are already competitive with gasoline scooters and three-wheelers. Vehicles with lead-acid batteries tend to be older models that require more frequent charging, but they also tend to be less expensive than the more efficient lithium battery EVs.

Huong Le, a researcher for ICCT, told Rest of World that Vietnamese riders began opting for electric scooters in the mid-2010s, without any government incentives. First adopters tended to be high school students and the elderly, who would purchase slow-speed lead acid battery EVs because they didn’t need a driver’s license to ride them. Today, these riders still characterize much of Vietnam’s unusually high EV market share, Le said.

Tran Le Diem Hang rides a VinFast Klara, a first-generation, Vietnamese-made electric scooter, one of the most popular models in the country. She hops on her scooter four to five times a day to deliver coffee from her shop in Vũng Tàu Province, 100 kilometers from Ho Chi Minh City.

As a small business owner, Hang earns more than 15 millionVietnamese Vietnamese dong ($635) per month. For her, the 35 million dong ($1,500) upfront cost she paid for a modern scooter was affordable, without a single subsidy or tax incentive. As of the first half of 2022, the average monthly income of workers in the first six months of 2022 is 6.5 million dong according to  the General Statistics Office of Vietnam.

Hang told Rest of World that she doesn’t need to worry about rising oil prices, and pays significantly less on the maintenance and operating costs of her electric scooter. “I’m quite confident with the future of electric two-wheelers in Vietnam,” Hang said.

In China, early EV adoption dates back to the late 1990s, when major cities began to ban gasoline two-wheelers in city centers as an early bid against air pollution. The bans encouraged the electric two-wheeler market well before China came to dominate the global battery industry and started churning out electric cars.

With China’s ongoing push to develop the domestic EV supply chain, aimed largely at passenger cars, two- and three-wheeler manufacturers took advantage of local battery production. Among lighter vehicles, like mopeds, lithium battery models are now comparable in price to their international combustion equivalents in China, Siyi Mi, a two- and three-wheeler specialist at BNEF, told Rest of World. If battery prices continue to fall in the next few years — a big “if” — some of these EVs could achieve a rough price parity as well, Mi said.

In India, as in Vietnam, many of the initial strides in EV adoption came in the form of unregistered vehicles: slow-speed three-wheelers used for delivery services, which are now very much electric. In recent years, falling battery prices and government incentives at the national and state levels have also drastically lowered the upfront cost of two-wheeled EVs.

Sunitha Anup, an ICCT researcher, told Rest of World that a zero emissions standard or fuel efficiency standard would be even more effective in EV two- and three-wheeler conversion. “It’s still not clear why there is no mass adoption,” she said. “But this segment is considered to be the fastest to electrify provided the standards are all in place.”

India is also investing in production-linked incentives, which will lower manufacturing costs for both lithium batteries and carmakers. While incumbent manufacturers still generate the lion’s share of two-wheeler sales, startups like Okinawa Autotech and Ather Energy are disrupting the EV scooter space, despite recent fire accidents fueling consumer hesitancy.

“Right now, the business is running on steroids,” Ravneet Phokela, chief business officer at Ather Energy, told Rest of World. “We don’t bank on subsidies to be there forever.”

VinFast, which is backed by the real estate conglomerate VinGroup, is building 3,000 charging stations across the country, and, currently, sells its two-wheelers exclusively in Vietnam. Taiwanese company Gogoro is also transforming transportation infrastructure through its battery-swapping networks and partnerships with local companies, such as Indonesia’s e-commerce giant Gojek, which has rolled out hundreds of e-scooters for their drivers.

“Indonesia is the third largest [gasoline and electric] two-wheel market in the world, after China and India. So, it’s clear that all three of these markets are absolutely critical,” Jason Gordan, vice president of communications at Gogoro, told Rest of World via email.

The Gojek-Gogoro pilot is an example of how Indonesia, which sold less than 10,000 electric two-wheelers last year, according to BNEF, will achieve its national goal of 13 million electric motorcycles on the road by 2030. Though well-positioned to develop a domestic EV supply chain with large critical mineral deposits, Indonesia has not yet developed the policy environment that proved critical in India and China’s expansion.

Thailand, which sold approximately 4,000 electric two-wheelers in 2021, also seeks to ramp up its electrification quickly, aiming to produce 53,000 electric motorcycles by 2025. Both Thailand and Indonesia — as well as China, Vietnam, and India — are historically the world’s manufacturing hubs for two-wheeled vehicles, according to the Motorcycles Database. Yet, experts remain dubious about the ability of these early markets to achieve their EV goals without more policies in place.

For Tran Minh Hai, a car mechanic living near Ho Chi Minh City, one of the primary challenges to continued EV adoption in his country is simply a matter of education. Hai has already convinced three of his neighbors to purchase electric scooters after citing numerous benefits — from cleaner air to conveniently located charging stations. He also told Rest of World that he spends 6,000 dong for one week of charging his electric scooter, rather than 100,000 dong on fuel costs for his gasoline model — less than 10% of his weekly spending. VinFast estimates its scooters save 50% of spending on maintenance, fuel, and repairs.

But aside from savings, Hai said, the biggest draw of purchasing an EV is the feeling. Riding his VinFast Feliz, he said, feels “like surfing, or flying into the air with no noise.”

Childhood trauma is not just an outcome of abuse; here are other factors to consider – Times of India

What time is The Rings of Power episode 3 released on Prime Video?

Minecraft, FIFA, and Roblox have the most gaming-related cyberthreats