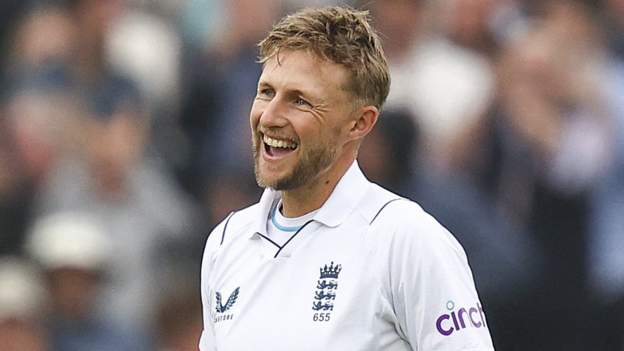 Joe Root’s masterful century led England to a five-wicket win in the first Test against New Zealand on the fourth morning at Lord’s.

Root, who ended 115 not out, also became the second England batter after Sir Alastair Cook to reach 10,000 Test runs.

Despite the challenge of the gloomy conditions, the England pair were assured throughout, taking the tension away from what could have been a nerve-shredding morning.

When Root pulled Tim Southee for the winning boundary, it completed a remarkable turnaround from 69-4 on the third afternoon and finally gave England a Test win after only one in their previous 17 matches.

For New Zealand, the world Test champions, a seven-match undefeated run against England has come to an end.

The second match in the three-Test series begins at Trent Bridge on Friday.

Even as England crumbled in the final months of his captaincy, Root turned himself into the world’s premier Test batter.

Here, in his first Test since relinquishing the leadership, he gave another demonstration of his class and reaffirmed his importance to this England team.

On a murky morning, with the floodlights on, Root resumed on 77 and continued to bat with the urgency he showed late on Saturday night.

He had the fortune of inside-edging past his stumps on more than one occasion, but when he clipped Southee to mid-wicket to reach three figures he also became the 14th man in Test history to achieve the 10,000-run landmark.

At 31 years and 157 days, he equals Cook’s record as the youngest man to reach the milestone, and he is also the first to do it less than 10 years after his debut – this is his 118th Test since he first played against India in 2012.

Remarkably, given his career accomplishments, this was also Root’s first hundred in the fourth innings of a Test.

He received superb support from Foakes, who made his most telling contribution with the bat since a hundred on debut against Sri Lanka in 2018.

The wicketkeeper scored more freely than the third evening, taking advantage of a New Zealand attack that struggled to use the overhead conditions to their advantage.

New Zealand may have hoped for a boost from the second new ball – available 15 overs into the day – but England made such swift progress it never arrived.

And, when Root hit three boundaries in one Southee over, it completed the third-highest run-chase to win a Test at this famous ground.

The former skipper left to the acclaim of the crowd, wiping tears from his eyes as England’s magnificent match-winner.

This win should be a huge morale boost for England, not just because of the winning start to the Stokes-McCullum era, or their awful recent form, but for the way the hosts fought back after they looked certain to be beaten.

New Zealand started the third day 227 runs ahead, only for England to take the tourists’ last six second-innings wickets for 34 runs. When England suffered another top-order collapse, they were in danger of folding to a heavy defeat before Root, Stokes and Foakes pulled off a memorable victory.

In truth, the new management will have learned little this week. England’s bowling is dangerous when the ball moves and often toothless when it does not, and the batting is heavily reliant on Root and Stokes. At least one big improvement came in England’s fielding.

The challenge for Stokes and McCullum is to build on this, to either improve the players that are struggling at this level, or identify some who are more likely to succeed.

In the neighbourhood of Diego Maradona

As for New Zealand, it is typical of their battling qualities that they ran England so close. They are a team in transition after some key retirements, had little preparation for this match and at one point on the first day were 45-7, yet still almost won.

Indeed, given their position at various times on Saturday, the Black Caps will feel like they should have triumphed. Had Colin de Grandhomme not overstepped when bowling Stokes when he had only one, they probably would have done. Stokes went on to make a crucial 54.

The tourists are likely to be better when they arrive in Nottingham, meaning England will have to find further improvement in order to win this series.

‘Nice to do it for Ben’ – reaction

England captain Ben Stokes, speaking to BBC Sport: “Playing at Lord’s is special but to come away with the win after the way it ebbed and flowed was brilliant.

“Mr Dependable Joe Root was amazing. I am so pleased for him. And having Broad and Anderson back was such a boost. They are such an inspiration. To see them running in with their knees up getting the crowd going was special.”

New Zealand captain Kane Williamson on Test Match Special: “We were hopeful of getting an early break but it was not to be. Root is difficult to dismiss, he played outstandingly well. We had opportunities. It was not meant to be.”

England batter Joe Root, on TMS: “It’s a nice feeling. It was hell of a game and for this game to be in Shane Warne’s memory with such aggressive cricket is fitting in many ways.

“I feel great. It means a huge amount to the group and it was nice to do it for Ben. He has done it for me so many times over the years it was nice to give it back for him today.”

Former England captain Michael Vaughan, on TMS: “It is amazing what a win can do for the group.

“Imagine if England had lost – there would have been a lot of pressure at Nottingham for those young players.

“Hopefully this gives the younger players a boost. A lot of them didn’t know what it is like to win a Test match for England.”

Quavo talks about leaked video of fight with Saweetie

Millions of MyDeal users have data sold online after breach