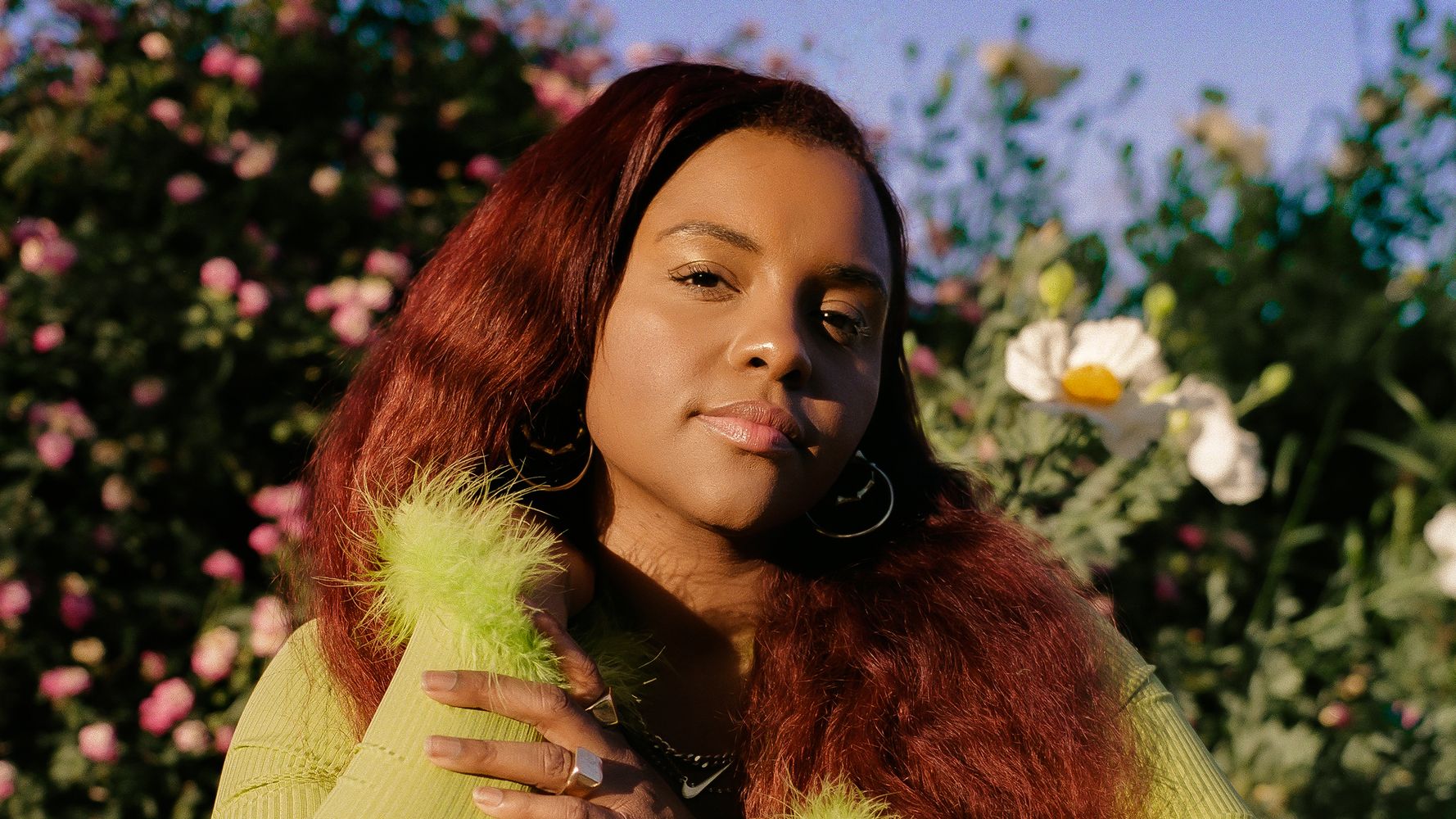 This profile is part of our Culture Shifters series, which highlights people who are changing the way we think about the world around us. Read about film archivist Maya Cade and internet star Keyon Elkins.

Self-sovereignty is a priority for Latashá Alcindor. It’s what guides her as she creates her music and brings in resources to grow and sustain her career. And through her success, she’s helping other independent artists find their path as well.

For the Los Angeles-based rapper, whose stage name is Latashá, that was always the plan. But she never would have guessed that she’d be able to do it through a digital world.

The 34-year-old is creating freedom in her music career through cryptocurrency and non-fungible tokens ― essentially unique digital assets (usually art), transmitted on a cryptocurrency blockchain, most popularly Ethereum. These NFTs are housed in the ever-evolving metaverse, a term The New York Times describes as a convergence of virtual reality and a digital second life.

After years of dealing with an industry that typically undervalues musicians, Latashá set out to become one of the first artists to publish her music videos to the blockchain as NFTs for others to purchase. As a result, she’s seen more success in the past year than she imagined possible.

She told HuffPost that she wants to share that knowledge with artists who are often disempowered.

“I really do believe that being the artist that I am right now, and in crypto, I’m finding a home for me,” Latashá said. “I push for women rappers to find space in crypto because I think they will really win here more than they ever have. And I know for so many women rappers, they dealt with trials. I don’t want to see that for artists anymore. I just want to see people in their wellness.”

Her boyfriend and fellow artist, Jahmel Reynolds, introduced her to NFTs in 2021. Latashá was initially skeptical but figured she’d try a new way to make money since she wasn’t able to perform early on in the pandemic.

She saw Web3 (another name for the metaverse) as an opportunity to “let go of the middle-man.” It empowered her to define the value of her music in ways other platforms in Web2 (the internet as we know it now, which includes social media, streaming services, etc.) does not. She said the transparency behind each transaction in the blockchain is unmatched.

“It’s not like the music industry, where I don’t know where my money is coming from or who’s giving me money,” she said. “It’s not like any other job source really where we’re not sure. And so I really got into it because it spoke to my ethos of sovereignty. I wanted to be self-governed. I wanted to figure out how I could make this bread without somebody in my ear telling me anything about who I am or what my value is worth.”

In February 2021, she minted her first NFT for her 2017 song “Ilikedat..” The video was filmed by Reynolds on a platform called Zora, that allows media to be shared across cryptocurrency networks. Shortly after, Zora recruited her to help it build its platform with more diverse communities in mind. Later that year, she minted her music video for “Gogo Wyne,” currently worth about $44,000. As her NFTs continue to sell on the market, Latashá gets 30% from each sale.

“Artists have never had that opportunity before for them to choose their royalty rights. And so with this space, we could say what our royalty is in Zora,” she explained. “For a lot of Black artists, this is some money boon healing that we’re finding. And I just can’t say anything else, but if you don’t want to try it, don’t try it.”

A year after minting her first NFT, Latashá’s main hustle largely goes hand-in-hand with her music. She currently juggles her role as head of community programming at Zora with her own artistry. For the platform, she created an educational program called Zoratopia, in which she organizes events and conversations to give folks better access and resources on how the metaverse can benefit them. She makes a case to artists that this is an avenue for them to become their own CEO.

The expansiveness of her music has actually been a reason why others in the industry have tried to hold her back, she said. Her songs often explore identity, femininity, empowerment and spirituality. Since 2014, she has released four independent projects and several other singles, and she boasts more than 54,000 monthly listeners on Spotify.

Latashá’s sound blends hip-hop with some of the more eclectic influences she was raised on. “​​Sometimes it would be like La India, Ana Gabriele, Gloria Estefan, Selena. And then other times it’ll be like Chaba and Patra and Denim,” she noted. The Afro-Latina musician would secretly listen to certain artists she knew her family didn’t want her to listen to, including Biggie, Tupac and DMX. Similarly to how she saw her mom navigate life, Latashá used music and lyricism through songs and poetry to find healing, landing her in the rap game at 23.

Early on, she didn’t know much about how the industry worked, and she certainly didn’t know how to make her music profitable.

“For the first five years of my career I was just figuring it out, and I hated it,” the “Who I Am” artist said. “I was like, this music industry is really trying to box me in. I feel like I’m forced to transform myself into somebody I don’t want to be. Women rappers just deal with that.”

Anxiety and depression hit her hard. She took some time off. In 2015, she was given $10,000 from a Black female poet — whose name she would not disclose — who had heard her music and wanted her to keep going. So she did. Latashá quit her bank and temp jobs and started doing gig work to pay her bills.

“I hated that journey, but it was better than what I was dealing with trying to get signed. So I had independence and I promised myself to be DIY and really figure this thing out.”

It set the stage for her to get some major looks. She started making music for Maybelline and Ulta commercials and became the first resident hip-hop artist to collaborate with two prominent New York performance spaces, National Sawdust and The Shed. Being able to take better control of her work in this way gave her the entrepreneurial spirit she needed to support herself through her music.

Latashá isn’t the only musician who has used a virtual marketplace to distribute and make a living off of their work. Artists as big as Snoop Dogg and Nas and as niche as Iman Europe and Devin Tracy, have performed concerts in the metaverse, using NFTs to generate income from their songs. And unlike traditional streaming, the artist dictates the amount they believe their work is worth and continues to collect royalties each time it sells.

Latashá notes that the metaverse is imperfect. And though there are plenty of factors sullied by human bias, it shouldn’t stop people from learning about it.

“The internet was built by the people, (and) the people need some sort of income for building the internet,” she said. “This is historical content that you are collecting if you decide to collect anything from the blockchain. This is just stamped, historical moments that we’re building up here. It’s like collecting vinyl.”

Even though the current crypto crash has presented a huge red flag for those who may have considered investing, Latashá said she hopes others see the big picture, even in through the peaks and valleys that come with creating a new internet.

“The underlying reasons for web3 is to shift the paradigm and take our power back,” she said. “There will always be ebb and flows in every market and everything that is in life. So in these moments, it’s reminder to get back to your intentions, center your energy and values. It’s a reminder that creation should be a constant state at all times. It’s a reminder that what we are doing here is with and beyond the money. We’re creating a world built out of community consciousness. So I ask people, what do you want to see happen cause it’s about us. It’s about you.”

While Latashá continues her work with Zora, she’ll release music throughout the year that documents her multifaceted talent, including a project, “Joyride,” that will be available on Sound.xyz. She plans on becoming a star in the NFT space and using her platform to continue to help other artists. Her dream is to build residencies for artists to secure the resources they need without a label.

“I’m really dreaming to create new blueprints for more artists to see success in a different kind of light,” she said. “I don’t want artists to feel that they have to be trapped to a label or trapped in some system in order for them to make it. I want you to feel like you could be fully yourself and move in the directions of your dreams through Web3, hopefully.”

‘The People’s Joker’: A New Take on the Batverse You May Never See