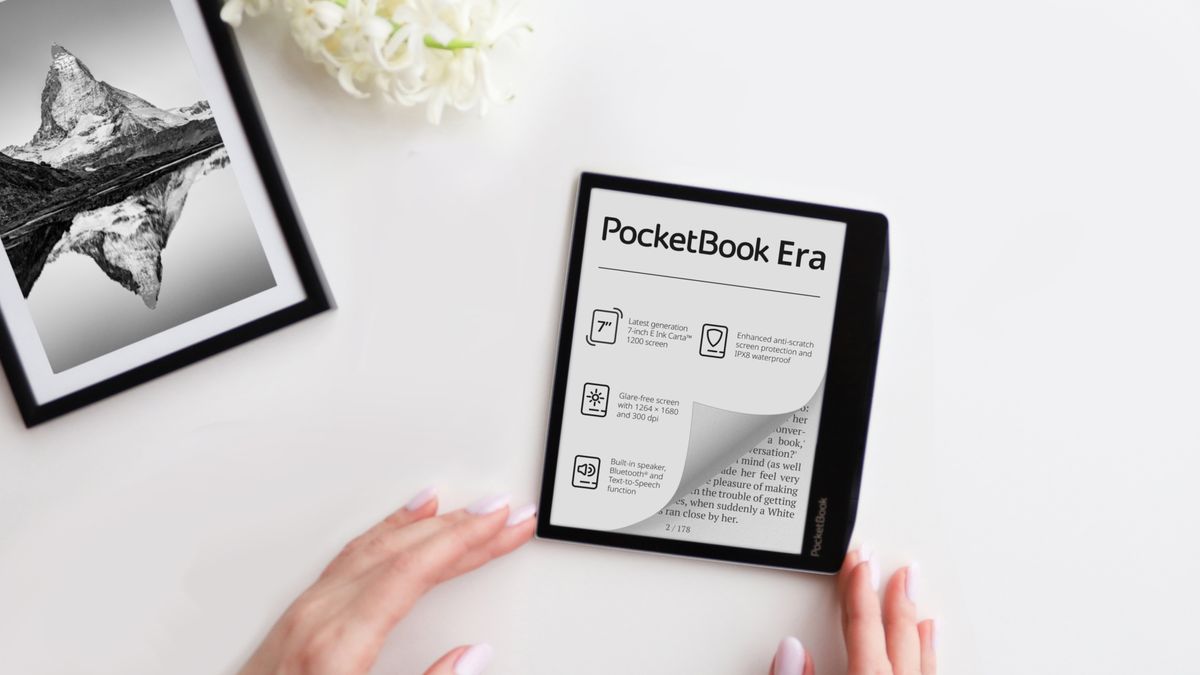 Amazon Kindles and Kobo tablets are some of the best ereaders you can buy and yet neither company has a single option with built-in speakers. Of course, smaller players in the ebook reader market play by different rules and are already offering ereaders that boast speakers. The latest one is the PocketBook Era.

Brought to us by Ukrainian-born but Switzerland-based company PocketBook, the Era is a 7-inch ereader that’s taking the competition right up to the likes of the Kindle Oasis and the Kobo Libra 2.

PocketBook is known for devices with a very specific look – rounded lower corners that show off a strip of metallic color, and control buttons typically below the screen. The Era, however, has its page-turn buttons on the edge of its broader side bezel – where the power button is also located – that appears to have had its corners chopped off as opposed to being rounded.

The PocketBook Era adopts the latest E Ink Carta 1200 screen technology that, while keeping the resolution at 300ppi, improves response times by 20% and page contrast by 15%. But instead of using a plastic layer on the top like most other ereaders, the Era features a glass-finished screen that sits flush with the bezels. And, importantly, the screen’s light can be controlled for both brightness and temperature, promising a comfortable reading experience in any situation.

Alongside the PocketBook Era’s built-in speakers for audiobook support, there’s also Bluetooth connectivity, so you can go the traditional route of pairing wireless headphones to the tablet. Additionally, PocketBook says you’ll be able to pair it with car audio systems if yours has Bluetooth support, and even portable speakers if you’re so inclined.

The PocketBook Era supports 29 different file formats that include 19 for ebooks, six audio files and four graphic formats. That’s a lot more than either a Kindle or a Kobo ereader. Plus, there are 22 preloaded dictionaries, handy if you’re learning a new language.

PocketBook promises that the Era comes with anti-scratch protection – an important inclusion when the screen is topped by a layer of glass – and its waterproofing is rated at IPX8, meaning it will be just fine in two meters of water for up to 60 minutes.

There’s a 1,700mAh battery that should give you about four weeks’ worth of reading before it needs topping up, with two colors to choose from – each with its own storage capacity.

The PocketBook Era is available in Stardust Silver that has a maximum capacity of 16GB and in Sunset Copper that comes with 64GB of storage. They’ll set you back $199 (about £159 / AU$275) and $249 (around £199 / AU$345) respectively. PocketBook devices have limited availability around the world, but you can import them from retailers in the US like Amazon and Newegg.

From Ben Affleck to Saif Ali Khan, 10 of the messiest divorces in Hollywood and Bollywood

Tropical Storm Roslyn to strengthen to hurricane near Mexican resorts

Digital fingerprints of a million child abuse images made