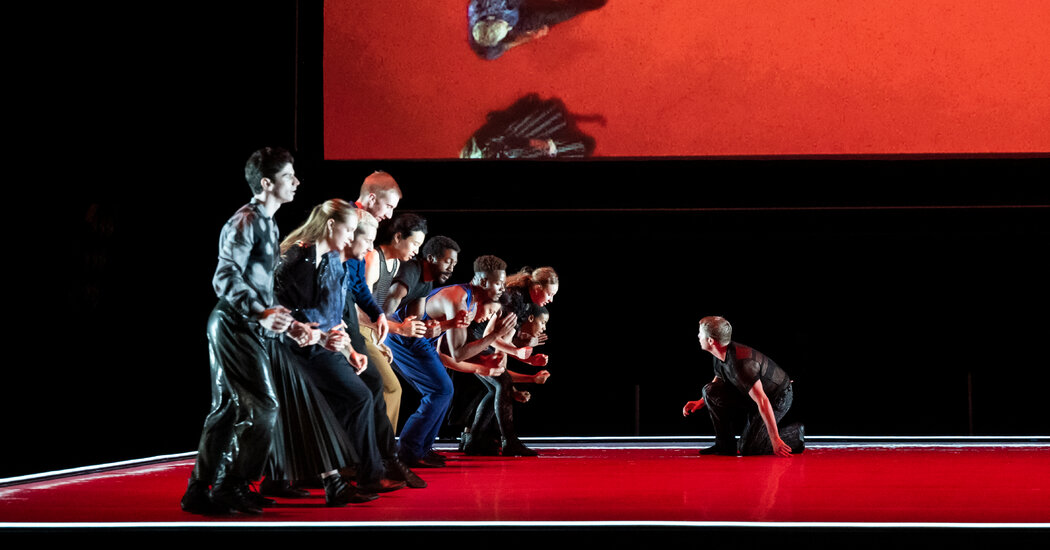 PARIS — Love, in its first blazing flare of passion, is the subject of Benjamin Millepied’s “Romeo and Juliet Suite,” a tightly crafted chamber work playing to rock concert-size audiences, at La Seine Musicale here. And death is the subject of Alan Lucien Oyen’s “Cri de Coeur,” a new work that opened the Paris Opera Ballet season on Tuesday at the Palais Garnier.

Both dances play with ideas of theatricality and reality within their narratives. Both use hand-operated cameras and film footage projected onto huge screens to offer intimate, close-up glimpses of the dancers onstage and off.

But the works could hardly be less alike. For Millepied, a tightly condensed narrative is the motor for an expressive, emotive physicality. For Oyen, movement is just one of many elements informing a diffuse, rambling story.

“Romeo and Juliet Suite,” performed by Millepied’s L.A. Dance Project and set to recorded selections from the Prokofiev score, is a lean account of Shakespeare’s tale that assumes some knowledge of the plot and uses film to augment and intensify the drama. Twelve of the company’s 16 dancers represent the warring families with no overt differentiation; only Romeo, Juliet, Tybalt and Mercutio are identified. Costumes (Camille Assaf) are simple streetwear. There is no scenery, no hostile parents, no Paris (the suitor Juliet rejects) and no Friar Lawrence as the unwitting catalyst of the tragedy.

In a further departure, Millepied’s Romeo and Juliet aren’t necessarily a man and a woman. There are three casts playing the title roles during the 11-show run, which ends on Sunday: a heterosexual couple, two men and two women. It’s a simple idea but a powerful one to see represented in a ballet, which, in the frequently seen versions by Kenneth MacMillan, John Cranko or Rudolf Nureyev, is a lodestar for heterosexual passion.

As far as I could tell after watching the excellent female cast (Daphne Fernberger and Nayomi Van Brunt) on Sunday, then a superb male duo (David Adrien Freeland Jr. and Mario Gonzalez) on Wednesday, Millepied hasn’t altered the choreography or the partnering for the couples. And although there were inevitably differences of movement — the tall, muscular men had a bigger, space-eating quality and were more balletic in their presentation — the overall sense of the work and its central tragedy felt unchanged.

The piece opens on an empty, red-lighted raised stage, a lone couch at center and a Rothko-effect red-orange screen behind. We first see the dancers offstage through a projection from a Steadicam, operated by Sebastien Marcovici (L.A. Dance Project’s associate director). But once they whirl on to the stage, the narrative proceeds with rapid efficiency, the camera augmenting the crowd and fight scenes with overhead shots that show the dancers’ flocking patterns across the stage. (The video artist Olivier Simola is credited as an artistic collaborator.)

After Romeo and Juliet meet, the camera follows them outside to show their swooping, ecstatic pas de deux in large-scale, close-up detail on the screen. (A passionate and very real kiss by the male lovers was, rather touchingly, followed by applause after a slightly tense silence in the 3,200-seat hall.)

The onstage film varyingly suggests memory, hallucination and menace as images multiply and blur, and it also allows a frighteningly realistic view of the one-on-one fight scenes and their aftermath. Here, gender does matter; when Tybalt (a sinister Vinicius Silva) pulls a knife on Romeo, danced by Fernberger, the male-on-female violence feels far more frightening than when he attacks Freeland in another cast.

Throughout, the camera partners and bolsters, rather than dominates the dance. (Marcovici performs his own kind of virtuoso dance as he moves around the performers.) Millepied’s vocabulary is essentially balletic but incorporates a grounded, loose-limbed quality and a vibrant kinetic energy. You could quibble about the narrative abstraction of this “Romeo,” but it’s a version in which the movement — and the company’s uniformly marvelous dancing — carries the story.

It’s uncommon to see homosexuality presented so matter of factly on a mainstream dance stage. (Even Matthew Bourne’s famous “Swan Lake,” with its all-male swan corps de ballet, remained opaque on the issue.) It’s important that in this “Romeo and Juliet,” it’s not signaled as important.

Narrative and film are also essential elements in Oyen’s “Cri de Coeur,” probably this season’s most significant commission by Aurélie Dupont, the former artistic director of the Paris Opera Ballet who resigned, with baffling suddenness, in June. (A successor hasn’t yet been appointed; the Paris ballet world is humming with rumors.) But Oyen isn’t interested in a linear narrative, nor — like most of the choreographers commissioned by Dupont during her six-year tenure — in ballet technique.

Oyen’s approach is firmly situated in the Tanztheater tradition of Pina Bausch, and “Cri de Coeur” is in many ways similar to “Bon Voyage, Bob …” a work he created in 2018 for Tanztheater Wuppertal, Bausch’s company. As with “Bon Voyage,” he uses an eclectic mishmash of music and mobile sets — a kitchen, a bedroom, a living room — that slide on and off the exposed stage. There are also dioramas of mountains and countryside, with dancers sometimes posed in their midst like wax figures in a tableau.

Adnan Sami’s weight loss transformation is unbelievable; here’s how he went down to 75 kilos from 220 kilos in 16 months | The Times of India

The dioramas represent the work’s omnipresent theme: death. That was also the theme of “Bon Voyage,” and as in that piece, Oyen uses the veteran Wuppertal performer Helena Pikon, here playing the mother of a young woman (Marion Barbeau), who has a fatal illness. “Cri de Coeur” has a Bauschian structure of sequential vignettes — people deliver lines, declaring their thoughts and feelings — interspersed with dance.

A lot is said, and not much happens. An imaginary companion called “No one” (Antonin Monié) keeps Marion company (as in Bausch’s works, the performers are called by their real names); the luckless Laurène Levy hisses and eats flies while incarnating a lizard (why?).

There is also a stab at saying something about nature of theatricality and reality. At a group-therapy session, the performers introduce themselves as Paris Opera Ballet dancers, and there are allusions to the company’s hierarchy, and a foray into the ornate foyer de la danse behind the stage.

“Everything onstage isn’t false; everything in life isn’t true” someone intones near the beginning. (Which was almost three hours away from the end.)

Although the dancers who speak manage reasonably well (Barbeau, who recently starred in Cédric Klapisch’s film “Rise” carries it off best), the delivery comes off as inauthentic. Aside from the banal text, that’s because it’s impossible to apply Bausch’s methods — used over decades of reflection and refinement with the same artists — as if it were a formula to be applied in any context, with artists who have no experience of this process.

The dance — with its Bauschian upper body fluidity, touches of Mats Ek-esque deep bends and William Forsythe-inspired partnering — is fine. But like everything else in “Cri de Coeur,” it doesn’t feel necessary.

Salesforce is getting into bed with WhatsApp

The Atlantic’s Tech And Business Workers Intend To Form Union

How Constance Wu Survived That Tweetstorm