Are TikTok Algorithms Changing How People Talk About Suicide?

In May 2022, Lido also has sent a full and final settlement agreement to ex-employees stating that they could not do bad publicity when they were paid

Besides ex-employees, parents have also pitched in that their bookings with Lido have not been cancelled and the company refuses to pay refunds

In February 2022, Inc42 reported that edtech startup Lido has laid off 150+ employees, just months into raising funds, citing a shortage of funds. Even though it abruptly laid off the employees over a Zoom call, it had promised to pay dues of employees within 90 days.

Four months after the resignation period, employees’ dues are still unpaid. Not only are the dues unpaid, but social media testimonials of the ex-employees point out that the startup remains unresponsive to their calls, text messages and emails.

“I had worked in Lido for 2 months and was asked to resign. I did [that] without any further questioning,” stated one of the employees on her LinkedIn post. “..till now I am not paid. I have been mailing, calling and texting those I know are still working there, but getting no response from anywhere.” 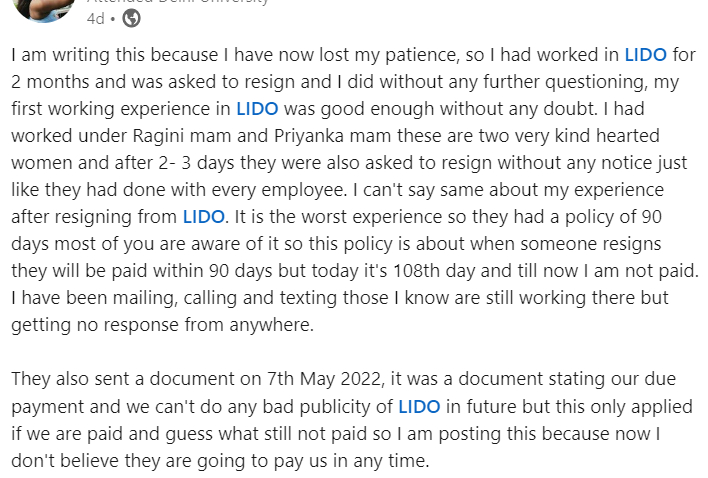 The employee added that the company shared a due payment document in the first week of May 2022, citing that ex-employees could not do bad publicity when they were paid.

Since the payments are due, many employees have taken to social media to draw attention.

Another ex-employee on Twitter stated that they have received a full and final settlement mail from the company in mid-May, stating that Lido will start paying employees in tranches, but nothing of the sort has begun yet. 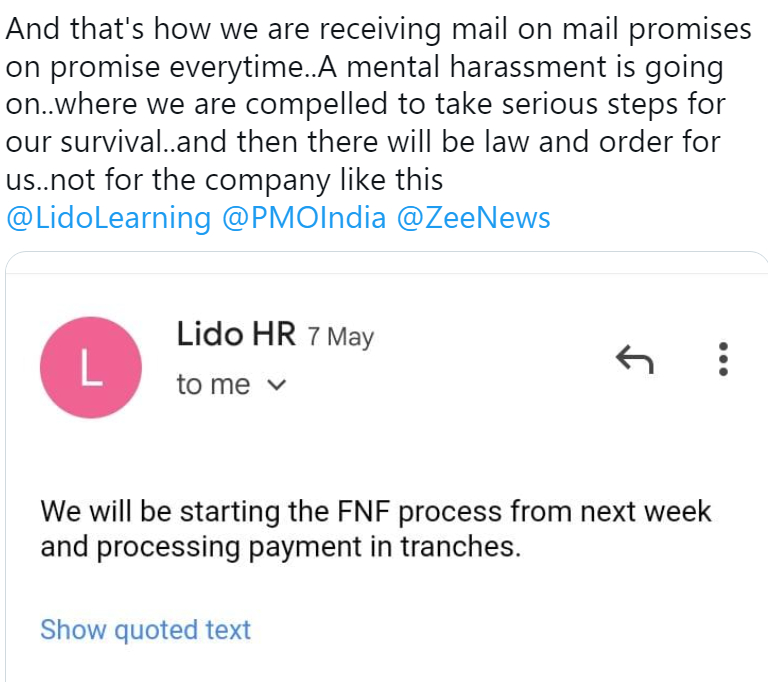 Not only that, but it also seems that Lido partners with fintech EarlySalary for salary payments and many employees who have drawn a loan on their salary, or taken advance from their salaries are being treated as defaulters.

Not Only Employees, Students & Parents Affected With Lido’s Operational Inefficiencies

Inc42, previously, also reported that Lido has been marred with operational inefficiencies, including the laid-back attitude of teachers, and other employees at Lido, disconnect between senior management and Lido employees and refund and payment issues with students and parents.

A quick social media scan also revealed that parents who have applied for refunds from Lido over the past six months have not yet received any update. Some parents, who also took loans for their children’s studies, are still paying the EMIs since Lido refuses to cancel their bookings.

Founded in 2019 by ex-BYJU’S executive Sahil Sheth, Lido Learning offers small-group online tutoring to the K-12 segment in subjects including math, science, coding and English. It had claimed in its funding round in July 2021, that it eyes $100 Mn in ARR for FY22. The promise remains unlikely to be fulfilled.

An email written to Lido by Inc42 remains unanswered.

In 2022, Lido was the first of the edtech startups to lay off employees, followed by Unacademy laying off 1500+ employees. Vedantu and WhiteHat Jr have also laid off over 1600 employees combined.

In 2021, there was a talent war amid edtech, meaning poaching and extremely high and lucrative salary packages had become a norm. The strategy seems to have backfired on edtech startups in 2022 that have been citing the funding crunch, bleeding global economy and the need to optimise resources, to provide pink slips to their employees.

Many startups have rationalised the layoffs as building better unit economics, focussing on automation and the latest tech in the sector, reducing cost-intensive marketing and pulling the thread on most profitable sectors and building a phygital model now that schools have started opening again.

The layoffs – a move mimicking the 2019 layoff season with foodtech and the 2016 season with ecommerce – have prompted many to question some of the reckless expansion strategies of these edtech companies between 2020 and 2022.