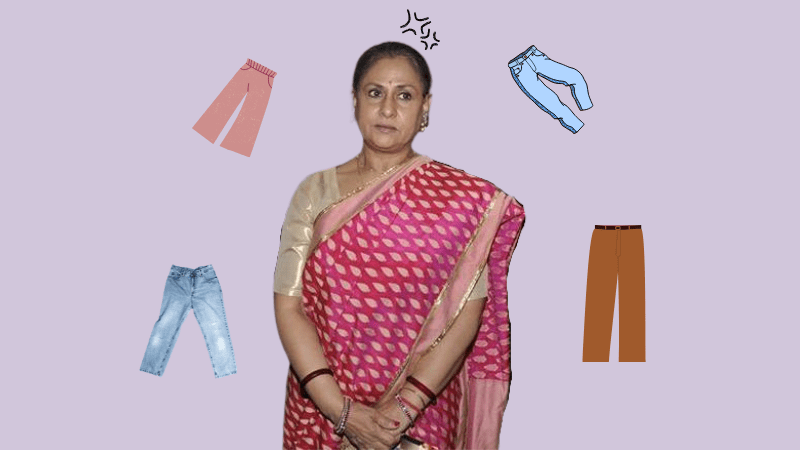 The veteran actor said pants give women “man power” and they need to embrace “woman power” instead.

Veteran Bollywood actor Jaya Bachchan thinks pants are giving women the wrong power — “man power” instead of the more suitable “woman power”. But hold your horses before you set fire to all the pants you own.

In a recent podcast with her granddaughter Navya Naveli Nanda and daughter Shweta Bachchan-Nanda called What The Hell Navya, the three generations of women discussed “women in different spaces”. The topic outlined all the ways in which women “struggled to be themselves”. Jaya addressed the two women and asked, “Why is it that Indian women are wearing more western clothes?”

Shweta had an explanation ready to go, “It is because of ease of movement. A lot of women today are not just at home, they are going out, they are getting jobs. It is easier to pull on a pair of pants and a t-shirt than it is to maybe drape a sari.”

In response, Jaya argued that wearing a sari all the time is not what she’s implying but perhaps that there should be clothes assigned specifically to women so they claim their own power. “I feel very unknowingly we have accepted that the western clothing gives that man-power to a woman. I would love to see a woman in woman-power. I am not saying, ‘go wear a sari’, that’s just an example. But in the West also, women used to dress in dresses. This whole thing changed much later when they started wearing pants.”

First off, not only has the Sholay actor assigned a gender to pants, but also to power. Why are pants a man’s garment? If women wore dresses in the West before, as pointed out by Jaya, didn’t men also wear dresses of sorts in the olden days? Fashion is all about evolution. Gender specific clothing should be the least of anyone’s concern. People should wear what they feel comfortable and confident in — that’s all that matters.

Now coming to gendered power, there is no such thing is feeling a “man’s power” in pants or a “woman’s power” in dresses. Power does not come from clothes but from the individual who wears them. And it’s up to them to decide what makes them feel powerful — be it pants, shalwar kameez, a dress, a sari or a suit.

In the podcast, while Shweta argued that the Industrial Revolution may have brought about that shift when men went to war and women started working in factories, Nanda added to Jaya’s point. “To give you an example, Falguni Nayar, who’s the founder of Nykaa, I’ve never seen her wear anything but a sari — she always wears a sari. Even when she went to Bombay Stock Exchange to ring the bell the day her company went public.”

Nushrratt Bharuccha: The success of the recent pan-Indian films is the barometer to audiences’ tastes and choices – Times of India

To this Jaya had a sensible response that focused on her being a “self-made person” which makes her confident in her skin and in whatever she wears“. Perhaps the Kabhi Khushi Kabhie Gham actor needs to focus more on what she said here and realise that it’s the woman that emanates power, not the clothes she’s in.

All we have to say is, do not fear the pants, Jaya. Give them a try, they might surprise you.

With eye on storm, NASA presses ahead with Artemis launch attempt