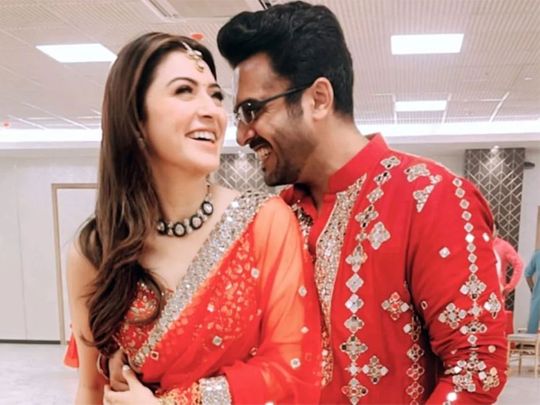 ‘Koi Mil Gaya’ fame Hansika Motwani’s pre-wedding celebrations got fans talking as photos circulated on social media. Motwani (31) is marrying Sohail Kathuria, and the wedding festivities kicked off on Tuesday with a Mata Ki Chowki ceremony. Dressed in a red saree, the bride-to-be matched her fiance who was also dressed in red.

Motwani looked elegant as she accessorised her outfit with a jewelled choker, matching earrings and a maang tikka.

The soon to be couple were seen posing with Prashant Motwani, the actor’s brother, dancing to the tune of dhol in a video that an actor friend posted online.

Recently, the Indian actress shared pictures of her dreamy engagement from Paris on her Instagram. Her beau Sohail is a Mumbai-based entrepreneur. The couple will reportedly tie the knot in December 2022 in Rajasthan.

At 15, Motwani played the lead role in Puri Jagannadh’s 2007 Telugu film ‘Desamuduru’, which won her the Filmfare Best Debut — South.

The bride-to-be is known is also well known for her role in Hrithik Roshan’s ‘Koi… Mil Gaya’ and Himesh Reshammiya’s ‘Aap Kaa Surroor’. Motwani was last seen in Tamil thriller ‘Maha’, which was released in theatres on July 22.

SAIC Mobility Robotaxi valued at $1B after $148M Series B – TechCrunch

Google Drive malware is targeting governments around the world

Watch: Bollywood star Varun Dhawan on getting wild for ‘Bhediya’ and why he’s fed up of film reviews by influencers