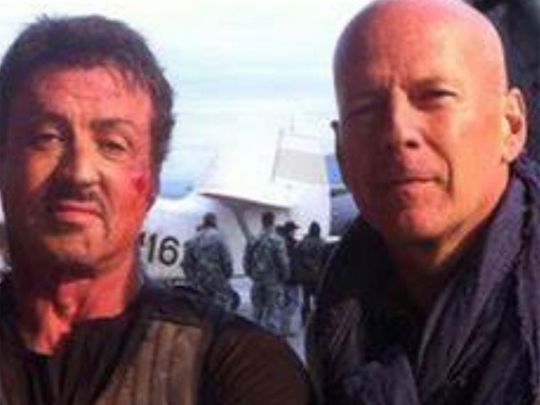 Action star Bruce Willis has been having a ‘tough time’ with his aphasia diagnosis, friend and co-actor Sylvester Stallone told Hollywood Reporter. The 67-year-old actor, who is best known for ‘Die Hard’ among other action movies, was diagnosed with the psychological condition in March and Willis’ family announced his retirement.

The condition, according to National Health Service (NHS) of the UK, affects speaking and understanding. Stallone, in his interview with the entertainment publication, said, “Bruce is going through some really, really difficult times. So, he’s been sort of incommunicado.” The ‘Rocky’ fame added that he was one of the first to speak to Willis following the diagnosis.

Stallone shared an old picture of himself with Willis on Instagram, along with caption that read: “We go back a long way. Praying for the best for you and your wonderful family,” he had written

In March, the Willis’ family released a statement, “To Bruce’s amazing supporters, as a family, we wanted to share that our beloved Bruce has been experiencing some health issues and has recently been diagnosed with aphasia, which is impacting his cognitive abilities. As a result of this and with much consideration, Bruce is stepping away from the career that has meant so much to him.”

TikTok and Twitch Streamers Are Trading Sleep for Cash

On the Edge of Delhi, a Dynamic Cultural Scene Takes Shape