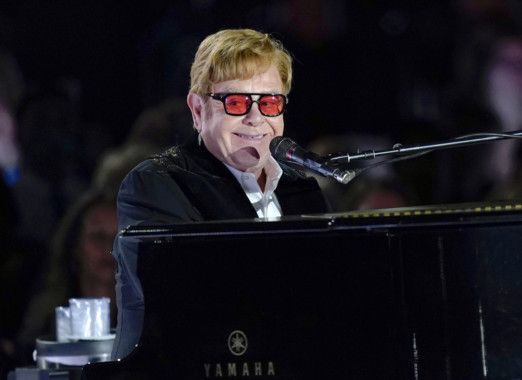 Elton John’s audacious 1970 US debut at a local nightclub moved a critic to declare that the slight young Englishman would become one of rock’s most important stars. It didn’t take long.

Within five years, his reputation cemented by a string of hits including ‘Rocket Man’ and ‘Daniel,’ fans packed LA’s Dodger Stadium for two rousing, sequin-bedecked concerts. This weekend, John will close out the North American leg of his last tour at the ballpark.

He calls it the right choice.

“I started off in Los Angeles at the Troubadour (club), and I want it to end here because it’s been a magical place for me,”

John said in an Associated Press interview. The three-night stand is Thursday, Saturday and Sunday, November 17, 19 and 20.

The final LA concert will be streamed live on Disney+ starting at 11 pm EST Sunday. The three-hour event will open with ‘Countdown to Elton Live,’ which includes an interview with John and celebrity shout-outs.

John promised more bell and whistles than at the tour’s other concerts — but hopefully without “any elephants or giraffes coming on stage,” he said, a wry reference to ‘The Lion King.’ The Tony-winning hit musical with songs by John and Tim Rice marks its 25th anniversary on Broadway this month.

The stadium stage is “enormous and fantastic. The videos are wonderful. I like to be surprised, so I will be surprised,” John said.

The rock ‘n’ roll giant’s enduring body of work includes ‘Your Song,’ ‘Tiny Dancer’ and ‘Goodbye Yellow Brick Road.’ He’s earned six Grammy Awards, including a Legend Award, and is in the Rock and Roll Hall of Fame and Songwriters Hall of Fame. His record sales worldwide have surpassed 300 million.

Lipa, Kiki Dee and Brandi Carlile will join him on stage Sunday, and it’s no coincidence that all are women. He’s had rewarding creative relationships with female artists, he said, and the three are “very important singers in my life.”

He and Dee had a 1976 hit with the bouncy ‘Don’t Go Breaking My Heart’ and she was with him at his first LA stadium show. John is close to Carlile, who joined him for ‘Simple Things’ on his 2021 ‘The Lockdown Sessions’ album, and their families vacation together. It’s a big week for Carlile, who earned seven Grammy nods Tuesday.

As for Lipa, “I love her dearly,” John said. He credits their ‘Cold Heart’ single with giving his career a boost and “launching me into a different stratosphere as far as streaming goes and connecting with young people.”

“I feel modern. I feel elated with working. When you work with a different artist, you always learn something from them, and that’s the whole point,” he said. His collaboration with Spears, which was suggested by his husband, David Furnish, yielded that and something more.

“It was a brilliant idea because having watched the documentaries and all the news footage about her horrible time with her family and conservatorship, I wanted her to feel appreciated by music fans again,” John said. “To see that (single) become a success makes me feel so happy, that she’s hopefully feeling the love from those people.”

The Farewell Yellow Brick Road tour began in September 2018 in Pennsylvania with the first of the 300-plus dates scheduled worldwide. It was suspended in 2020 because of the COVID pandemic and resumed in 2021 in New Orleans.

In January, John heads to Australia and New Zealand, then moves on to Britain and Europe. The tour is set to conclude in Sweden next July.

The schedule would be demanding for any artist, but a genial, healthy-looking Elton showed no sign of strain in an interview last week, a few hours before a San Diego concert. Reviews have noted his vitality: “His unmistakable baritone sounds as mighty and resonant as ever, and his energy at the ivories remains positively infectious,” Billboard magazine said of his New Jersey stadium show last July.

“I’m not tired,” John told AP. “The audiences are absolutely amazing. They dress up, it’s like a big party. And so rather than seeing it as a chore … I’m going on stage every night thinking, ‘What are they going to be wearing tonight? What’s going to be the reaction tonight?’ At the stage of my career, it’s just an astonishingly rewarding thing to happen.”

He was a tender 23 when Robert Hilburn, the then-Los Angeles Times music critic, predicted John’s stardom after the Troubadour appearance in West Hollywood. Hilburn said John’s performance that August night “was, in almost every way, magnificent” and called his songs (written with lyricist Bernie Taupin) “staggeringly original.”

Success followed success. While John describes the 1975 stadium concerts as the pinnacle of his career at that time, he wasn’t in the “happiest place.” He recalled a dark period of instability (dramatised in the 2019 biopic ‘Rocketman’) that included a pill overdose three days ahead of the shows.

Such turmoil is far removed from his life now, which includes his two sons with Furnish.

“I’m happy, I’m contented,” said John, who’s in his third decade of sobriety. “I have a wonderful husband, a great family, I have great friends, a wonderful career. I’ve everything that any person could ever want in their life. I’ve never been as happy personally than I am now, at 75 years of age.”

“If I hadn’t got sober, I wouldn’t be here and I wouldn’t have had the wonderful things that have happened to me since,” he said.

A prominent activist, he’s shared his name and good fortune. He created the Elton John AIDS Foundation, which reports raising more than $500 million. In 2019, President Emmanuel Macron gave France’s highest award to John for his contributions to the arts and efforts to fight HIV/AIDS around the world.

Is the Yellow Brick Road tour really goodbye? “It is definitely the farewell tour,” he said, although a short-term residency, such as Kate Bush’s three weeks at London’s Hammersmith Apollo in 2014, has its appeal.

“I’ll be recording with other people, and I’ll be hopefully writing an album for myself. So it’s not as if I’m stopping doing anything,” John said. “But I’m not travelling. Travelling takes me away from my family.”

Hockey Canada CEO, board step down over handling of sexual abuse

UAE-based fintech Qashio raises $10m in a seed round

A guide to responding to haters on social media, courtesy Nadia Jamil