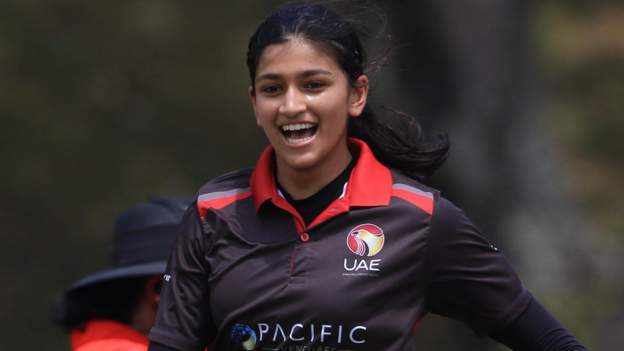 It took just seven balls for the United Arab Emirates to knock off their nine-run target and beat Nepal by 10 wickets in a very one-sided Under-19 Women’s T20 World Cup qualifier in Malaysia.

Nepal won the toss and chose to bat but were dismissed for eight in 8.1 overs, with six players going for ducks and Sneha Mahara top scoring with three.

The UAE openers then chased down the total in 1.1 overs with two extras.

It has not been all bad for the Nepal team at the Asia qualifiers. They beat Qatar by 79 runs on Friday on the opening day of the tournament, scoring 117-3 before dismissing their opponents for 38.

Saturday’s defeat by the UAE is by no means the heaviest or the lowest score of recent times.

In 2017, a Indian cricket team was bowled out for only two runs in a women’s under-19 one-day super league match.

Then in 2019, Mali women recorded the three lowest T20 international totals, being dismissed for 6, 10 and 11 at the Kwibuka Women’s T20 tournament.

‘We kept it simple’

Six team are competing in the Asia tournament with the winner qualifying for the World Cup in South Africa in January 2023.

“It’s a great feeling for everyone in the team and gives us great confidence for the next [three] matches, but our job is not done,” said Gaur.

“We want to win all five [games] and qualify for the U19 T20 World Cup. Before the match we discussed, with coach Najeeb, where to bowl to apply pressure, it’s a new ground and wicket so we kept it simple – bowl on the stumps.

“Captain Theertha and Coach Najeeb instilled a lot of confidence in my ability, which gave me the belief in myself that I could do the job and restrict them to a low score.”

Nandakumar added: “We planned a lot for this game and it was a great team effort. Our fielding was good and we executed our plans 100%.”

Going loco for local: Colour me happy with Odd and Eve’s Colourpuris

FIFA World Cup: Dubai’s DWC to operate up to 120 shuttle flights between Nov 20 and Dec 19

Elle Fanning Reveals Which Celebrity She Thinks She Looks Like, And… What?

Tiananmen: Arrests reported in Hong Kong on anniversary of massacre