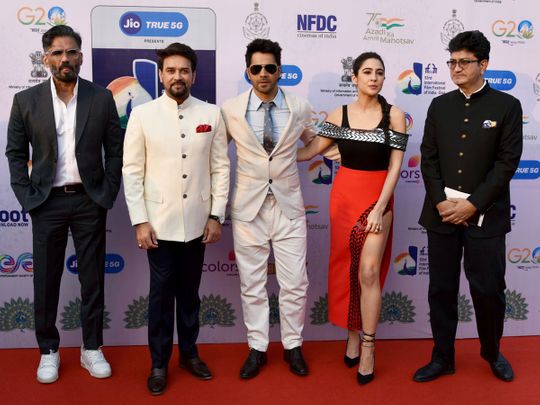 National Award-winning Indian actor Manoj Bajpayee, who was honoured on the opening night, spoke about how Indian cinema has become “democratised”

“Cinema has become so democratised now that anybody with talent can make it big here. We were just talking about how talent rules on our flight here to Goa with Paresh Rawal and Suniel Shetty,” said Bajpayee.

Actor, director, and producer Ajay Devgn, who is here to showcase his latest thriller ‘Drishyam 2’, also spoke about his love for cinema.

“I can’t choose between production, direction, and acting … For an art lover, it’s all about seeing films in totality and every department should ideally excel. I am here because of my love for films,” said Devgn. As always, he was pragmatic when asked about what advise he would give to the budding filmmakers around the globe who were attending this year’s IFFI, hosted by the Ministry Of Information & Broadcasting through the National Film Development Corporation (NDFC) and the Goa government.

“I am no one to really dispense advice to anybody … But just follow yourself and most importantly believe in yourself,” said Devgn.

But the true hero who brought the house down was actor Varun Dhawan who danced robustly on stage to his hit and popular songs and did an impromptu mimicry gig on stage around icons like Raj Kapoor, Shammi Kapoor, and Shah Rukh Khan. The actor even prodded the strait-laced politicians seated on the front row to replicate his hook step from the song ‘Naach Punjaban’ (‘Jugg Jugg Jeeyo’).

Dhawan is in IFFI Goa to promote his upcoming horror comedy ‘Bhediya’ along with a raft of other Indian talents including Yami Gautham, Pankaj Tripathi, and

“IFFI Goa is a wonderful celebration of world cinema and I can’t wait to be a part of it,” said Dhawan.

Over the next few days, cinephiles and filmmakers from across the globe will gather around Goa to do just that.

Kannada film ‘Hadinelentu’, directed by Prithi Kumar was the opening feature of IFFI Goa. Blockbusters including ‘RRR’ and ‘The Kashmir Files’ will also be showcased during this festival.

Watch this space for more.

Armed with experience, insurtech MGAs are paving the way for insurtech 2.0 – TechCrunch

The fit and fabulous foodies of Bollywood