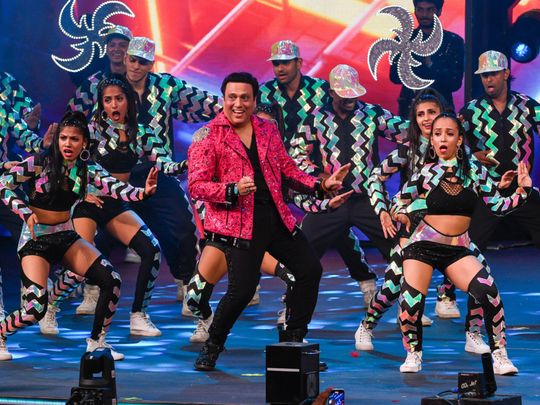 Bollywood A-lister Ranveer Singh cried like a baby on stage, seasoned icon Govinda showed the younger brigade on how it’s done by dancing like no one’s watching, and our eternal ‘dream girl’ Hema Malini reminded everyone that receiving the Lifetime Achievement is now a constant in her life.

Meanwhile, Pakistani actors Humayun Saeed and Sajal Aly displayed impeccable grace and lent gravitas to a campy night when it was their turn to take home their awards.

This is not a script of a bizarre and bombastic Bollywood potboiler, but a rapid round-up of what went down at the star-studded Filmfare Middle East Achievers Night held at the Dubai World Trade Centre on November 19.

Gulf News was given the ring-side view of all the action, drama, and misfires that took place at the awards night designed to honour the best in Bollywood and beyond.

While the star-studded ceremony would have benefitted greatly from trimming its run time that spilled over four hours, there was no denying that watching the likes of Singh mingle with veterans like Govinda and letting his hair down with his peers like Ayushmann Khurrana and Arjun Kapoor had its own zany appeal.

Here are our top moments of the night filled with glitz, glamour, and gorgeous ladies in spectacular gowns and sharply-dressed men in tuxedos:

Ranveer Singh gets emotional as he takes home the ‘Superstar Of The Decade’ trophy:

His energy is notoriously relentless but hand this man an award that celebrates his long innings in Bollywood and he begins crying like a baby. It was an emotionally charged night for the Singh Bhavnani household as his doting dad and mom watched their son collect the ‘Superstar of the Decade’ trophy from the front row.

The tears flowed among them and a generous helping of melodrama followed in quick succession. Singh couldn’t contain himself as he looked back on his days as an actor hopeful who couldn’t afford to pay the steep amount of Rs50,000 for his portfolio shots. Ironically, he comes from a reportedly affluent family, but it was still interesting to watch Singh recount his days as the quintessential struggling actor desperate for an acting break.

“My father didn’t blink an eye at the cost … I am a miracle who’s standing before you and I promise that I will continue to entertain you till the end of my life … Being an actor is all I wanted to ever be,” said Singh in a smattering of English and Hindi. He was dabbing tears, while his mother was spotted getting emotional.

“I hope you have tissues in your purse, mummy … And papa, do you remember how I thought the portfolio cost a lot, but you told me to go ahead and do it. I did it. The past 12 years has been a glorious journey,” said Singh jubilantly.

He dedicated his win to his mentor and movie mogul Aditya Chopra, who gave him his first acting break in ‘Band Baaja Baraat’ with Anushka Sharma.

“He took a chance on me when no one did and said ‘I found my next Shah Rukh Khan’ when he discovered me, but everybody thought he was mad … But he had singular belief in me and picked me up from nowhere and made me who I am,” said Singh.

He may have been emotional during his acceptance speech, but the second half of the award night saw him in high and jolly spirits. FFME 2022 had saved the best for the last as he was the final performer to hit the stage. But the true highlight of the night arrived when Govinda, who is his biggest idol, joined him on stage and they both danced to ‘Main Toh Raste Se Ja Raha Tha’ in perfectly synchronised manner.

Govinda is back in action as the Eternal Entertainer of Bollywood:

Trust Govinda to remind us why he ruled Bollywood in the 1980s and 1990s as a wholesome consummate entertainer with impeccable comic timing and seamless dancer moves. When the Gulf News Entertainment Editor was given the honour to present this trophy to Govinda, he spoke about how his fans had embraced him from the word go.

“I am the living proof that an uneducated actor can become the stuff of legends and can get receive love from his fans endlessly … Even when I am not acting in films, you all continue to shower your love and goodwill on me and I consider myself blessed tonight,” said Govinda as he accepted the award.

While he was humility personified, it was his dance moves that had our hearts. His routine on stage wasn’t heavy with gravity-defying choreography or intense moves, but Govinda through his expressions and eyes proved that dancing on stage can be graceful instead of bombastic. His expressions and smooth moves as he performed to his hits from films like ‘Raja Babu’ and ‘Hero Number 1’ were one of the golden moments of the night.

But it wasn’t just his fans who were floored by Govinda’s return to the spotlight, but it was fascinating to see relatively younger stars like Singh, Khurrana, Arjun Kapoor, and actress Nushrratt Bharuccha having their fan boy/girl moments as he hit the stage.

Their overt display of hero worship was evident when they all landed on stage after his dance act and reached for his feet, lying prostrate, to get his blessings. While some may find their antics a tad exaggerated and cheesy, it was still cute to see the sway that Govinda still has over Bollywood-mad colleagues and fans.

Janhvi Kapoor makes a dramatic entry in a golden panther:

What’s a Bollywood awards night in Dubai without a gigantic golden panther entering the crowds as Janhvi Kapoor sits on it like a queen bee? We are not making this up, but watching Janhvi weave her way into the stage atop a golden panther and then performing to her hit songs like ‘Nadiya Paar’ was the stuff of legends. She shimmied her way into the audience’s hearts in a sparkling bustier and glittering skirt. Her act was as dazzling as her wardrobe choices on stage.

Hema Malini’s still got it:

There’s an inside joke in Bollywood that the Lifetime Achievement Honour might be a glorious nod to someone’s career, but it’s also a sobering reminder that your time is up in the cinema and that your relevance may be fading. But Malini, who received the Lifetime Achievement Honour, proved that she’s made of sterner stuff. Dubbed Bollywood’s ‘Dream Girl’, she told Gulf News that the award was her testament to her body of work.

“I can proudly say that I have done some incredible work … I have received this honour many times, but it still feels very good. I am blessed,” said Malini on the red carpet.

On stage, she also followed up on Pakistani actor Sajal Aly’s comment that she would love to buy a home in India.

“You are always welcome,” said Malini. As the night progressed, it was clear that art knows no boundaries. Under one roof, we saw Pakistani and Bollywood stars mingle and promote each other.

Nargis Fakhri stuns in a black gown and aces the red-carpet look along with Sunny Leone:

When it comes to being funny and quirky on the red carpet, Sunny Leone and Nargis Fakhri can take all the credit. When Gulf News asked them if they embarked on crash diets before a red carpet call, they were surprisingly honest.

“I have just been having water and some tiny morsels of food … But seriously, I am a foodie and so I chose black because it’s more slimming,” said Fakhri. Leone, who also performed to her hit songs, had a similar response when it came to crash diets.

“I watch what I eat, but I am that Punjabi girl who loves her food … So crash diets are not for me,” said Leone.

Fad diets or not, both look resplendent in their gowns and were absolute stunners on the red carpet.

Now before you jump the gun, Arab idol Mohammad Ramadan was talking about India and how much he loved the bling that Bollywood carries. This year, he returned to the stage to performed to his latest songs with robust energy.

“I love India and am loving this Bollywood night,” declared Ramadan. He wasn’t alone. Hundreds who had gathered to watch the annual song-dance Bollywood spectacle enjoyed every minute of this bombastic and a slightly bloated affair.

The night was a celebration of stars and showed that cinema continues to be an art that transcends boundaries, cultures and nationalities.

Seth Meyers Predicts How Trump Will Pay For $250 Million Lawsuit

Let’s get in the weeds about fintech AUM

Finally the Right Time for a Second Chance