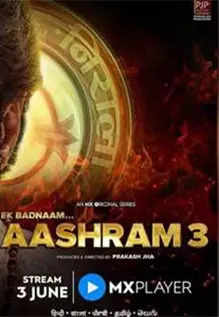 No need to look for Shiv Ling in every mosque; court’s decision on Gyanvapi should be accepted by all: RSS Chief

STORY: Justice is an ever-elusive concept in God’s territory—notoriously known as Baba Nirala (Bobby Deol) amongst mere mortals—and the opening credits elaborate on why it was foolish of Pammi (Aditi Pohankar) to even consider taking matters into her own hands. If season 2 does not render any closure to her, and us, then season 3 will burn you to ashes… slowly, silently.

REVIEW: In the ‘race’ of religion and culture and continents, there’s one universal (emotional) thread that ties people together—across age groups, beyond boundaries—and that is the problematic self-declaration of omniscience.

From the branding of subjects in Keith Raniere’s NXIVM in Canada to the mass suicide in Yogmaya’s Jal Samadhi in Nepal, unfortunately the bereaved almost always latch on to hope. And the predators prey. So, when India’s socially conscious director Prakash K Jha deep dived into the life of an imaginary (is he though?) Godman Baba Nirala—who hijacked both hearts and minds with his chants, which had catapulted his 2020 release ‘Aashram’ (then in its debut season)—it instantly became a hot topic for Covid-induced discussions. Through this quasi-religious commentary, Jha outed the obvious facade of these so-called ‘agents of God’ and made one wonder: which version of the Almighty is the real version of the Almighty?

Furthering this point in season 3, is a bloodthirsty Pammi and her partner Akki (Rajeev Siddhartha). The devastating deaths of their loved ones in season 2 had ignited the emotions of revenge in them and they set out to bring the culprits to justice but Jha knew better than ending the suspense at that crucial junction. What does he do to prolong the agony? He stretches, and stretches some more till the novelty of ‘Aashram’ wears off.

Granted, as criminal buddies Baba Nirala and Bhopa Swami, Bobby Deol and Chandan Roy Sanyal have cultivated their own ‘cultish’ fan following: if toxicity on screen had a face, these two would be it. Likewise, series revelation Tridha Choudhury (as Babita) commands praise of similar magnitude. All else, however, doesn’t concoct a drama worthy of a third innings on MX Player.

Not that we have ever lived in a cult before but experts in various documentaries (on this very topic) have emphasised on calculated conditioning and power trip as dominant factors behind the rise of such messengers from the above. ‘Aashram’, the entire series, has an air of malice and control looming over it. Previously, Jha’s approach toward this complex pyramid scheme was astonishingly simple: like MLMs, one brainwashed devotee brings in more potential brainwashed devotees until there’s no one else left to be brainwashed. The freshness of the material was so appealing that the veteran filmmaker had multiple tropes to experiment with. In this season, however, despite no substantial changes, he falters to keep us hooked. Soon after the quick recap and joining of dots from the season before, Jha struggles to stay on one single track—we have the tribal rebellion, there’s a faint sense of restlessness in primary characters and a certain someone climbing the ranks only to reveal later he/she is upto no good… yet again!